Later this week, Ireland head coach Andy Farrell will name his starting XV for the 2021 Six Nations opener against Wales. Given that they have France and England at home, this year, an opening weekend win would set the Irish up for a strong championship tilt.

Heading into the championship, England are the bookies' favourites while France are not far behind. Ireland are listed as best of the rest, and it is something that Farrell may use as motivation to his squad.

END_OF_DOCUMENT_TOKEN_TO_BE_REPLACED

On the latest House of Rugby Ireland episode [LISTEN from 34:00 below], host Eimear Considine ran through the big selection calls with Fergus McFadden and Ian Madigan. The trio discussed an added element to this Ireland team that may yet make the difference in winning a fourth title in eight years. 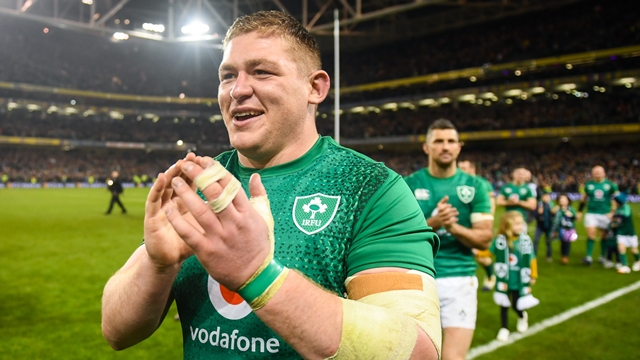 McFadden points out that Andy Farrell has increased options that definitely strengthens Ireland's hand in the second half of these upcoming matches. Dave Kilcoyne, Tadhg Furlong and James Lowe are all fit again, and McFadden can see them all being deployed as 'finishers' (impact subs) for the Wales game.

END_OF_DOCUMENT_TOKEN_TO_BE_REPLACED

Having a bonafide world-class player, in Furlong, coming off the bench for the final 25 or 30 minutes, says McFadden, is a big weapon at Farrell's disposal. The Irish bench was weaker than usual as they fell short in both the 2020 Six Nations at Autumn Nations Cup.

As for the back three, Ireland are massively boosted by having Jordan Larmour fit and back in good form ahead of the championship. For McFadden, he would start Larmour on the right wing with Keith Earls on the other wing and Hugo Keenan fullback.

"I still think Jordan will start. The back three and the back row are so competitive; they really are. But with Jacob injured - and Andrew Conway hasn’t played that much rugby [and] James Lowe hasn’t played that much since the autumn - I’d probably say it would be Keith Earls, who has played so good for Ireland for so long. He has to be in there. And then Jordan on the right with Hugo fullback.

Madigan agrees with McFadden's sentiments and says Keenan, the Leinster star who only made his Test debut last October, is 'the form guy and the most consistent'.

END_OF_DOCUMENT_TOKEN_TO_BE_REPLACED

"He was very good in the Autumn Nations Cup'," Madigan adds, "so you’ve got to find a spot for him. And with Jacob unavailable, it only makes sense to play him at 15. He’s a guy that’s making great strides and, every time he plays he seems to improve. He’s definitely someone who I can see the coaching team sticking by... Keith Earls has been rock solid on the wing and then the other spot is where the likes of James Lowe, Conway and Larmour are competing for."

YOU CAN WATCH THAT EPISODE HERE: