Brought to you by the Irish Cancer Society

"When mum was alive she always encouraged me to get involved in sport and physical activity."

Rory O'Loughlin and Andrew Porter fully understand the realities of a loved one being diagnosed with breast cancer, having both experienced it first hand. While Rory's mother Helen is thankfully doing well post-treatment since her diagnosis in 2004, Andrew's mother Wendy sadly passed away in 2008.

It's important that we do what we can to help fight the disease, so the Leinster and Ireland stars are getting involved in the Irish Cancer Society's Cups Against Breast Cancer coffee mornings. Speaking as part of the campaign, they told us their reasons for supporting the campaign.

"My mum went through treatment and it’s tough, but thankfully she is doing well. Empowering people to get back into fitness after cancer is a great initiative and just one of the ways the Irish Cancer Society is supporting cancer survivors," Rory said.

Over 3,100 women, and a small number of men, are diagnosed with breast cancer every year in Ireland. The two players took time out from preparing for Leinster's defense of the Heineken Champions Cup for an exercise session with several breast cancer survivors.

The event was part of the Irish Cancer Society's walking programme for survivors called "Strides For Life." The 15-week programme is designed to reduce the risk of cancer coming back through an exercise routine tailored to each individual's needs, and it run through the Society’s affiliated Cancer Support Centres across the country.

The importance of sport 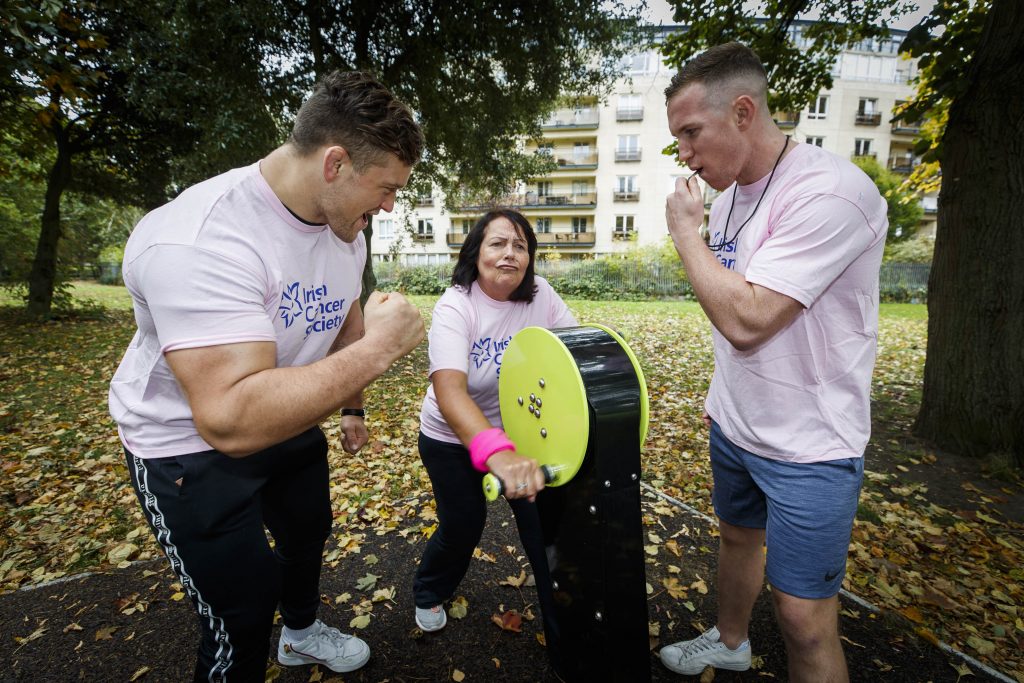 END_OF_DOCUMENT_TOKEN_TO_BE_REPLACED

Since Andrew's mother tragically passed away several years ago, sport has always been highly important to him. In terms of keeping him healthy both physically and mentally, it's been always a huge part of his life.

“One way we can all reduce our risk of cancer, and help prevent it from coming back is to engage in some form of regular exercise. When mum was alive she always encouraged me to get involved in sport and physical activity so it’s been part of my life since I was a child," Andrew said.

"I know the powerful benefits of exercise for both the body and mind so it’s fantastic to see a programme which is helping those who have been through difficult treatment to feel better mentally and physically," he said.

The Irish Cancer Society is asking members of the public to hold a Cups Against Breast Cancer coffee morning to support the fight against breast cancer this October. Money raised will fund breast cancer research and free services to support breast cancer patients and their families.

Brought to you by the Irish Cancer Society


popular
WATCH: For the first time since 2011, someone has won the Winning Streak jackpot of €500,000
15 new documentaries you should be watching on TV in 2020
QUIZ: How well do you know Will Smith's movie career?
The JOE Friday Pub Quiz: Week 174
15 films from the last 15 years that legitimately deserve to be on the Leaving Cert
Latest opinion poll shows Fianna Fáil take 12-point lead over Fine Gael
Here are the brand new TV shows you'll be addicted to in 2020
You may also like
2 months ago
SportsJOE presents The Great Debate
2 months ago
WATCH: Players from Cavan RFC give our Ice Bath Quiz a go
2 months ago
The perfect night out for rugby fans looking to get over that World Cup heartache
3 months ago
Omniplex cinemas around Ireland to screen Ireland v New Zealand live
3 months ago
WATCH: Players from Loughrea RFC have a go at the Ice Bath Quiz
3 months ago
WATCH: Balbriggan RFC players take the Ice Bath Quiz
Next Page