Of course, given how active they are, many professional athletes need to consume more than the average recommended calorie intake, particularly in a sport like American Football where there are a hell of a lot of big guys.

Earlier this year, one of Watt’s coaches recommended a change to his diet and on some days, depending on how active he was, Watt’s daily calorie intake increased from 6,000 to 9,000 calories.

To reach that number, he reckoned he had to eat 50 slices of bacon, 20 chicken breasts and 13 whole avocados. In a single day. 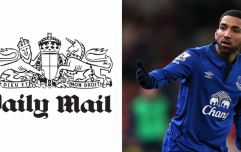 END_OF_DOCUMENT_TOKEN_TO_BE_REPLACED

To put that into some sort of perspective, Ireland’s Robbie Henshaw, no midget himself, recently spoke about his struggle to digest 4,000 calories in Ireland’s pre-World Cup training camp, 5,000 calories less (PER DAY) than what Watt would get through when he’s feeling peckish.

popular
5 years ago, Hollywood took a massive gamble on a huge sequel... and lost big time
Netflix has just added 12 very big movies to their library
One of the most underrated crime thrillers of recent years is among the movies on TV tonight
Tom Hardy set to play Hannibal Lecter-type serial killer in new series
Netflix backtracks on anti-password sharing measures following user outcry
Guy Ritchie's new war movie looks like it'll be a very emotional watch
The 50 most iconic songs of all time* have been revealed
You may also like
4 days ago
Nutritionist warns parents they shouldn’t let their kids drink Prime
1 week ago
Harvard study reveals how many times men should ejaculate each month to stay healthy
1 week ago
Couple left unable to eat or drink after spending €4k on 'Turkey teeth'
2 weeks ago
Food regulator chief compares harm of bringing cake into offices to passive smoking
1 month ago
Comedian Rhod Gilbert shares that his cancer is stage 4
1 month ago
Ashton Kutcher opens up about rare disease that left him unable to see or walk
Next Page