Get your self measured up and improve your game a hell of a lot with ForeGolf.

JOE spent a few hours with the guys at TaylorMade on their tour truck recently, and our eyes were opened to just how precise the club building process is for the Pros.  But surely it couldn’t make that much difference for a hacker like JOE. Derek at ForeGolf said “Yes, yes it can. And don’t call me Shirley.’

ForeGolf is operated by Derek Murray, a former club technician for the European tour, out of his workshop in Killeen Castle, Co. Meath. Derek and his team (Dave, Don & Aaron) claim they can build better golfers. JOE went along with a fairly skeptical outlook – we've been fitted for every club in the bag by a very well known retailer in Dublin, and since changing to our ‘custom fit’ clubs, we've actually gained 2 strokes – out to 13. We can drive the ball Okay, but can’t hit a green for love nor money – irons are a huge problem.

Challenge extended, ForeGolf. Let’s see what you can do. 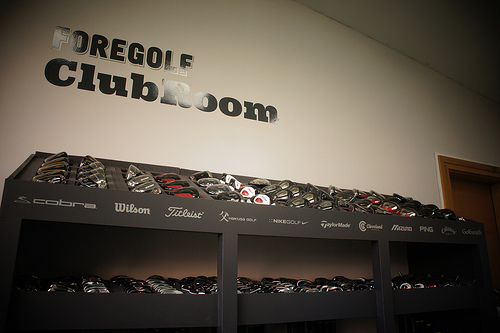 Taking a look in the bag...

When I arrived, Don took the clubs into his workshop and threw them up onto his workbench, to measure the Lie angle (the angle made as the club sits on the ground, between the dirt and the shaft), and the Loft (the angle of the club face, determining how high/far the ball should travel). How my ‘custom built’ clubs from the retailer faired was, well, shocking.

What Mizuno say JOE’s club lofts are vs. what they ACTUALLY are

END_OF_DOCUMENT_TOKEN_TO_BE_REPLACED

In Don’s own words, “You can’t play golf with that set up. The Lie angles wont let you deliver the club consistently to the ball. And your lofts - 2 degrees difference between some clubs, 5 between others, you will never get consistent distances from those irons”

Apparently, this is a common problem. “If you walk in here with a new set of clubs off the shelf, still in their wrappers, and the Loft and Lies turn out to be as they are claimed, I’ll give you €500 – no questions asked.” 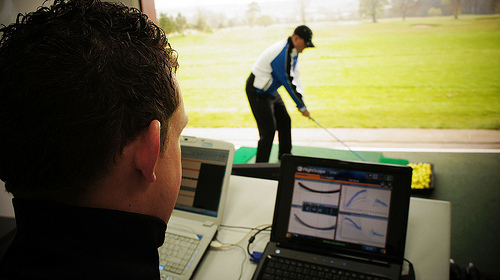 So without doubt JOE’s clubs were set up arse-ways, but how do they perform?

The bad shot has always been a weak spinny shot, so JOE stood into the FlightScope bay and hit a few balls. Instantly, you could see the issues with our golf game.

Spinny, weak, and inconsistent as all hell – just look at the impact marks: 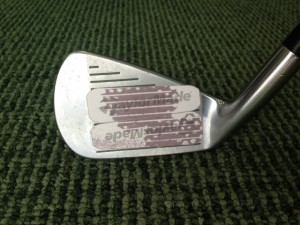 David Williams, Derek’s chief fitter, noticed there were stiff shafts in the clubs which should help with the fade, but we were still ‘lagging’ – the club was wide open when we struck the ball. “Most ‘fitters’ in golf shops will focus on the stiffness of the shaft, but you’ll never hear them measure Torque. You have shafts with very high torque at the top of the shaft, which means when you swing at speed, your hands are back over the ball as you follow through, but the club head hasn’t had a chance to spring back and get square. If we try a shaft with low torque, we should get some better results.” 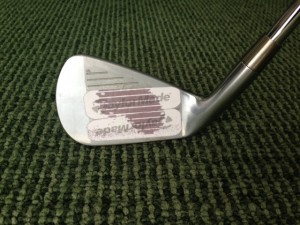 Instantly – JOE went from hitting a 6 iron 173 yards to hitting it 194 yards. The loft was the same, the only thing that changed was a shaft that better suited our swing.

“It’s good…” said Dave, “But it’s still a bit spinny. You’ll be fine on a calm day, but any sort of wind will kill your ball in the air. We need to give you a lighter shaft to keep you ‘on plane’ which should help cut down that spin, keep it stiff to suit your swing speed, and make sure it’s low torque so the club head doesn’t twist too much on you at impact.”

Dave took away the 6 iron, and handed us a 7 iron with his suggested shaft choice - Project X 95 6.0 Flighted. Problem solved. 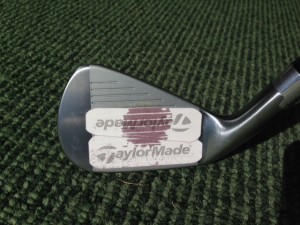 I was now hitting a 7 iron straight, with the perfect amount of spin, right out of the sweet spot - 7 yards further than I hit my own 6 iron.

We asked Derek Murray, the man who’s built clubs for Harrington, Cabrerra, Sergio, Lowry et. al, how ForeGolf get it right where so many get it wrong.

“It’s simple, really. You see stores around the country offering ‘Custom Fitting’ – but no matter how good the store or the clubs, none of these guys have spent nearly 20 years building clubs for the best players in the game. They’re looking for headlines, where as we’re looking for the tiny nuances that make the big difference. A half a degree either way on tour is the difference between winning the Open and losing your card.”

“JOE, you had your clubs fitted in a store – and we showed you in 5 minutes who far from fitted they were. Say you manage to get a good guy, who fits you for the right club – he’ll send off to a factory to stick your clubs together on a conveyor belt, throw them in a box, and you’ll get them in the post. That’s not custom, it’s mass produced, close enough to your specifications.”

So in 40 minutes, JOE had gone from a high spinning weak player, to a high launching, long hitting,  consistent drawer of the golf ball.

"We pride ourself on building better golfers." said Derek. "We show improvements for people of all ages and abilities, but the best results are usually seen with those players with handicaps between 11 and 18 - the people who already have a swing, but want to get dialled in. These are the players who start cutting handicaps - fast."

The lads will have a look at your bag and get you fitted for €100. Best €100 JOE's ever spent. We’ll never miss a green, or buy a golf club from a retail store, ever again.

popular
Travis Barker rushed to hospital after tweeting "God save me"
Gardaí issue update on investigation into murder of Sophie Toscan du Plantier
R Kelly sentenced to 30 years in prison for sex trafficking and racketeering
The 100 best clubs in the world have been revealed
Amazon Prime Video has just quietly added 15 big movies to its library
Calls for €20 social welfare increase and minimum wage of €13 in new Budget
The 10 best TV shows of 2022 so far
You may also like
5 months ago
Netflix to create Drive to Survive-style series around the PGA Tour
9 months ago
Golf's version of Drive to Survive is reportedly coming to Netflix in the very near future
1 year ago
Fine Gael senator says golf and sea-swimming restrictions should be lifted
2 years ago
"Very chaotic" - Irishman describes being struck by lightning on US golf course
2 years ago
Irishman hospitalised after lightning strike on US golf course
2 years ago
Shane Lowry given a hero's welcome in his hometown of Clara, Co. Offaly
Next Page