Ryan Giggs played with a lot of great players during his 23 years as a Manchester United player. He also played with some absolutely terrible ones…

Having been confirmed as Louis van Gaal’s number two yesterday, the Welsh wizard finally hung up his boots and called time on a playing career that spanned more than two decades and earned Giggs the status of the most decorated player in the history of British football.

Paying tribute to Giggs today, the Manchester United Twitter account posted an image of the 40-year old that included the names of all of the 150 players he has played at United since 1991, featuring greats like Bryan Robson, Roy Keane, Eric Cantona, Cristiano Ronaldo, duds like Bebe and Kleberson and players that most people had forgotten had actually worn the famous red shirt in the first place. Rodrigo Possebon anyone?

END_OF_DOCUMENT_TOKEN_TO_BE_REPLACED

Having seen the list we decided to put together a best and a worst XI of all the players to have shared a pitch with Giggs over the years. In their prime, one of these teams would put it up to many of the great European outfits of modern times; at their worst, the other XI would struggle to beat 11 lads cobbled together at the last minute down at the local astroturf.

We’ll let you decide which is which and implore you to remember that this is purely a matter of opinion; feel free to wholeheartedly agree or disagree in the comment box below.

Peter Schmeichel – No debating the goalkeeper’s spot; the Great Dane is deservedly held up as the best netminder of the Premier League era.

Gary Neville – If Giggs was picking the team, he’d insist that his good mate Gary would make the cut but he’d be well worthy of it too. Neville wasn’t very flashy but he was solid, dependable and a better crosser of the ball than he was often given credit for.

Rio Ferdinand – Giggs has played with a lot of good centre-halves over the years but in terms of ball-playing defenders, Ferdinand was probably the best of the lot. Could be a bit casual at times and often left the dirty stuff to Nemanja Vidic, but he made defending look easy when he was at his peak. 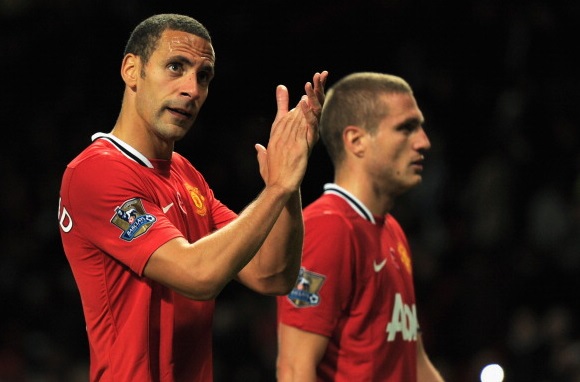 END_OF_DOCUMENT_TOKEN_TO_BE_REPLACED

One of the Premier League's greatest central defensive partnerships

Nemanja Vidic – Vidic and Rio Ferdinand formed one of the best central defensive partnerships the Premier League has ever seen and the Serbian was the purer defender of the two in terms of his tackling, ability to organise and willingness to put his head where others wouldn’t put their boot.

Denis Irwin – Patrice Evra certainly provides some competition for the left-back slot but Denis Irwin never put a foot wrong at the back and often threatened in attack when overlapping Giggs down the left flank. He was also excellent at set-pieces and comfortable on either foot and is a worthy inclusion here.

Cristiano Ronaldo – Giggs has played with some great players but this fella might end up going down as the best of the lot. Freakishly good in his last couple of years at United, he has become even better at Real Madrid, so much so that the £80 million the Spanish giants shelled out for him now looks like a bargain.

Roy Keane – The heartbeat of a few great United sides from the mid-90s to mid-2000s; we doubt if Giggs has played with a more inspirational character than the former Irish captain. 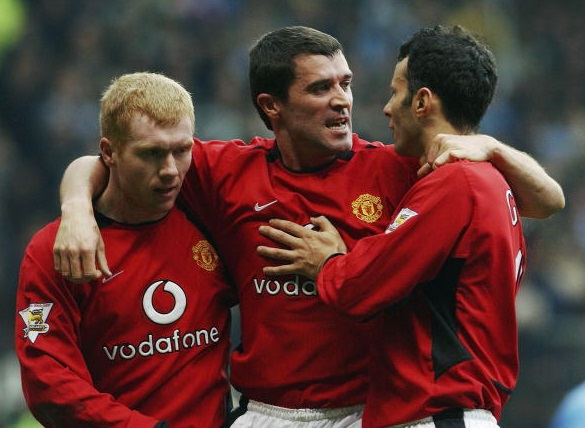 END_OF_DOCUMENT_TOKEN_TO_BE_REPLACED

Paul Scholes – If Keane was the brawn in the United midfield, Scholes was the brain. The ginger genius was blessed with remarkable vision and a canny knack of arriving at the right place at the right time to score some brilliant and crucial goals over the years. Reverted to a deeper role in the latter stages of his career where he conducted the tempo and direction of United attacks with aplomb.

Ryan Giggs – We were hardly going to exclude him now were we? Giggs’ remarkable longevity is often used as a stick to beat him with but at his peak he really was frightening to watch and he deserves huge credit, not just for his staying power, but for his ability to adapt his game when his physical attributes started to decline in his early 30s. It’s doubtful whether one player will win as many medals with one club ever again.

Eric Cantona – Manchester United may not have won their first Premier League title were it not for the influence of the Frenchman after his arrival from Leeds United and they certainly wouldn’t have pipped Newcastle in the 1995/96 season were it not for a string of important goals from their talisman. 17 years after leaving, 'The King' is still revered at Old Trafford.

Wayne Rooney – Considering all the great strikers that have played with Giggs throughout the course of his United career, this could be seen as a controversial choice, but although he arguably never fulfilled his vast potential, Rooney has consistently delivered the goods for United for the last decade and is on course to become the most prolific goalscorer in the club’s history.

Massimo Taibi – See Exhibit A below. We don’t think we need any further justification for his inclusion here.

Ronnie Wallwork – One of a number of distinctly average youth products to play for United in the early 2000s, Wallwork never quite made it at Old Trafford and, last we heard, he was jailed for handling stolen cars a few years back.

William Prunier – Played two games for United, one of which was a humiliating 4-1 loss to Spurs, after which the Frenchman was never seen again. He wasn’t missed either.

Pat McGibbon – Pat who? The former Northern Ireland international made just the one appearance for the Red Devils, the infamous league cup loss to York City in the 1995/96 season during which he was sent off.

Danny Pugh – In fairness to Pugh, he’s carved out a decent career since leaving Old Trafford in 2004, but with a lack of alternatives for the left-back position we’ve had to call on him to fill a gap in the back four here.

David Bellion – Fergie thought he could make use of a man with pretty outrageous pace when he bought him off Sunderland in 2003 but he was proved wrong, badly wrong, as Bellion flopped big-style at Old Trafford. Would you believe he’s still only 31?

Eric Djemba-Djemba – So bad they named him twice is a line often used in relation to the former Cameroon international signed by Alex Ferguson in 2003. He was shipped off to Aston Villa two seasons later and was declared bankrupt in 2008 thanks in no small part to a ridiculously lavish lifestyle; it was once claimed that he had 30 bank accounts and owned a fleet of expensive 4x4 cars. Signed for St. Mirren in February with a view to making Cameroon’s World Cup squad but has already been told he will not be kept on next season. 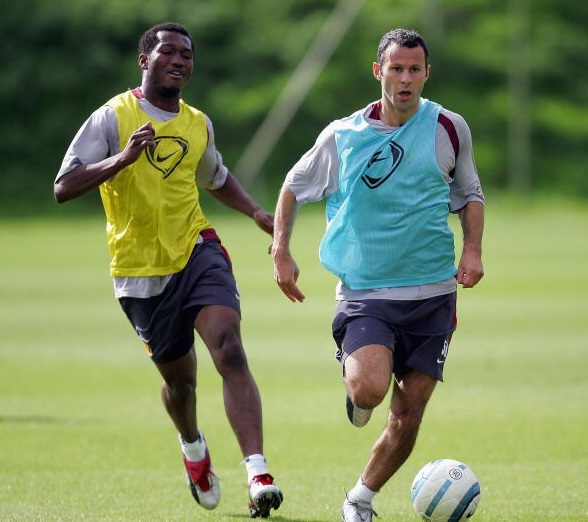 One has around 30 medals, the other had around 30 bank accounts

Kleberson – Along with Roque Junior, Kleberson was living proof of the fact that having a World Cup winner’s medal doesn’t guarantee that you’re going to make it in the Premier League. Struggled to adapt to life in England and made little if any impact before his departure in 2005.

Gabriel Obertan – Exactly the type of risky signing that Alex Ferguson regularly made shortly after the Glazer era began at Old Trafford, there has arguably never been a more awkward-looking winger in the Premier League than the bandy-legged Frenchman. Still at Newcastle, but we wouldn’t be surprised if he’s not there for much longer.

Bebe – Currently banging in spectacular goals for fun on loan at Pacos de Ferreira, he’ll always have to live with the ridiculous fee United splashed out for him in 2010. Fergie subsequently admitted that he didn’t even watch him before agreeing to sign him, a practise that he never repeated once he realised the error of his ways.

Manucho – The United team of the 2008/09 season is probably the last great United side, so it’s a wonder that this lad, signed from Petro Atletico, managed to get a game in that campaign. He only played in two matches, mind, and was offloaded away from Old Trafford shortly afterwards.

The Big Reviewski || JOE · The Big Reviewski with Dune, a mini-Hangover reunion & the best of Timothée Chalamet
popular
One of the best thrillers of the decade is among the movies on TV tonight
"Like a whip" – director describes fatal shooting on Alec Baldwin film set
A villainous Tom Cruise performance is among the movies on TV tonight
The JOE Friday Pub Quiz: Week 266
QUIZ: Get the ball rolling with this General Knowledge Quiz
The JOE Movie Quiz: Week 125
The full list of all the new shows and movies coming to Netflix in November
You may also like
2 weeks ago
The JOE Friday Pub Quiz: Week 264
1 month ago
Manchester City's Benjamin Mendy charged with four counts of rape
2 months ago
Michael Ballack’s son Emilio, 18, dies in 'quad-bike crash’
2 months ago
Five football documentaries to watch to kill time before the new Premier League season
4 months ago
Christian Eriksen stable but may not play football again, says sport cardiologist
6 months ago
Martin Compston reveals moment he delayed Line of Duty filming to watch Scotland penalty shoot-out
Next Page