It wasn’t a vintage year for Gaelic Football but there were still plenty of good games and one which will be held up as one of the best there’s ever been.

Finals often disappoint in terms of entertainment compared to what preceded them, but the meeting of Brigid’s and Ballymun on Paddy’s Day had it all.

END_OF_DOCUMENT_TOKEN_TO_BE_REPLACED

The Roscommon outfit were eight points down within ten minutes but staged a magnificent comeback featuring goals from county stars Senan Kilbride and Karol Mannion before who else but Frankie Dolan provided a fitting finale at the end of a truly gripping climax.

The fun soon stopped for Frankie, however, as he was subjected to a smacker on the lips from this guy afterwards... 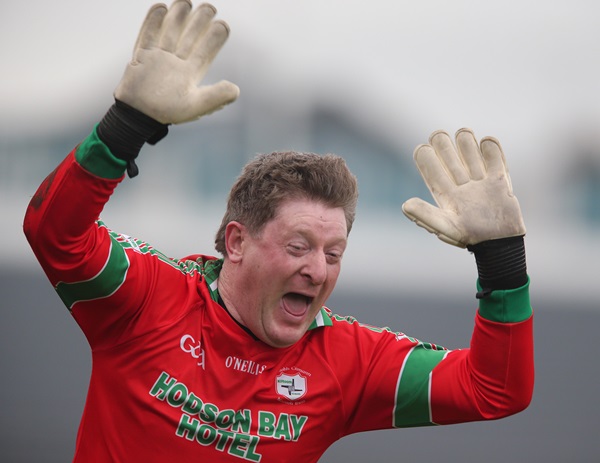 The All-Ireland Champions had shown signs of vulnerability going into this year’s Ulster Final and those vulnerabilities were ruthlessly exposed by a Monaghan side who upped the intensity to 11 in front of their home crowd in Clones.

Matching Donegal’s ultra-defensive style and taking it to another level, the Farney Men smothered the life out of Jim McGuinness’ men and kept them scoreless from the first whistle until three minutes before half-time, by which time Mark McHugh and Stephen Gollogly had been withdrawn after the most full-blooded challenge of the Championship.

Dessie Mone was inspired and both Darren and Kieran Hughes were outstanding in a victory that was justifiably well celebrated afterwards.

END_OF_DOCUMENT_TOKEN_TO_BE_REPLACED

Plenty of pundits had predicted that mean-spirited defence would be the order of the day in what was shaping up to be a so-called typical Ulster encounter, but the opposite was the case in a terrific game in Celtic Park.

It was the extra quality and experience that Down have gained from being a Division One team for years that enabled them to plot a route to victory but what really stood out on the day was the exhibition of point taking by the likes of James Kielt (the man with arguably the sweetest left foot in Gaelic Football), Eoin Bradley and Down’s Kevin McKernan, who scored four outstanding points from play.

END_OF_DOCUMENT_TOKEN_TO_BE_REPLACED

In terms of a contest this wasn’t much to write home about but it delivered the team performance of the year from a Mayo side who didn’t just beat the All-Ireland champions, but pulled their pants down and gave them a good spanking at Croke Park.

Cillian O’Connor set the tone and would go on to score a hat-trick in a 16-point victory in which Mayo never took their foot off Donegal’s throat, displaying ruthlessness that even had a lasting impact on Brian O’Driscoll, who tweeted his admiration for the men in green and red.

BOD was also one of numerous admirers of the individual efforts of Aidan O’Shea, who produced one of the finest midfield performances seen at headquarters for years.

Not just the game of the year, but the game of the decade and one of the finest in the GAA’s history and I say that having had over three months to reflect on an absorbing contest between the two giants of Gaelic Football and not while still affected by events immediately afterwards.

Nothing brings out the best in Kerry like the Dubs and they blew off the cobwebs early and often, with the Gooch delivering a masterclass in play-making in a performance that on its own should nearly have merited a Footballer of the Year gong and James O’Donoghue firing on all cylinders in front of goal.

Credit to the Dubs, they showed remarkable character to stay in the hunt before a powerful second half display that eventually overwhelmed the men from the Kingdom, but only after a lucky bounce of a ball enabled Kevin McManamon to inflict even more misery on Kerry two years on from his crucial goal in the 2011 decider.

The Big Reviewski || JOE · The Big Reviewski with Andy Serkis, Squid Game follow-ups & the return of Succession
popular
An underrated Denzel Washington thriller is among the movies on TV tonight
Gardaí to target four major offences as part of clampdown on Irish roads
The 50 most iconic songs of all time* have been revealed
Weird 'blacked out' island on Google Maps sparks wild conspiracy theories
PICS: The man with the biggest penis in the world has one unbelievable problem with it
RSV outbreak in children "more contagious than Covid", says GP
New €140 million road officially opens today, replacing one of Ireland's most dangerous roads
You may also like
1 day ago
Investigation launched after window smashed at Canada Goose store in Dublin
2 days ago
Emergency services rush to high-rise building on fire in Tallaght
3 days ago
Motorcyclist in his 20s dies following two-vehicle collision in Dublin
4 days ago
Two men arrested and firearm seized during search operation in Dublin
5 days ago
Buying a home in Dublin, Meath, Kildare or Wicklow? Don't miss this free virtual mortgage advice event
6 days ago
NASA astronaut shares amazing image of Dublin all the way from space
Next Page