JOE's tribute to The Ultimate Warrior: Five things that made him great

He's shaking the ropes of the big wrestling ring in the sky now, so we remember one of the greatest the squared circle has ever seen.

The JOE offices were saddened and shocked today by the news of the passing of James Brian Hellwig, known better to his legions of fans as The Ultimate Warrior.

For years when we were younger, his image appeared on our TV screens every week on Raw to pay-per-view events like In Your House and WrestleMania, while his iconic neon mask adorned our t-shirts and Hallowe'en costumes. We could never quite reach the awesome heights of his powerful rock-star hairstyle, but we gave it our best shot. 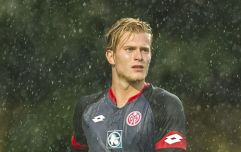 END_OF_DOCUMENT_TOKEN_TO_BE_REPLACED

Casting our minds back, we tried to break down into a few short but simple points exactly what made The Ultimate Warrior so great, why he was one of our favourites and why he will be so fondly remembered. From his Gorilla Press Slam to the trademark tassels on his boots, there's plenty more to him than the few points below, but when we think of him, we remember these things...

They almost never made any sense, and you could tell that he was coming up with this stuff as he went along, but it was all part of the essence of his character and part of what gave him that slight edge. He seemed to be in contact with another world, and we genuinely still believe that if you had asked him what he said during one of the promos, he probably couldn't tell you.

Load the spaceship with the rocket fuel...

Years later, Batista's entrance would be a homage to the great man himself, as he would also shake the ropes as he entered and left the ring, but you can't beat the original and best.

Many an elastic band from our lunchbox was rolled up our arms and on to our puny childhood biceps in a vain effort to look even a fraction as cool as the Ultimate Warrior, but we never quite achieved it.

A match that is regularly (and rightfully) remembered as a classic of its time and one of the absolute best, it was Hulkamania against the man from Parts Unknown, two forces of nature meeting in the squared circle. Hogan presenting the belt to Warrior afterwards was a nice touch, but it's hard not to feel even a few goosebumps looking back at this.

His last appearance on Raw

What looks now like an act of fate, Warrior was able to be inducted into the WWE Hall of Fame as well as make an appearance on Raw just days before his death. That makes his passing all the more surreal for the fans, but it's also a great reminder of the type of character that he was, and what a ring presence he had.

As much as wrestling is about the physical element and the moves you can perform in the ring, no one cares about the guy who can pull off the perfect suplex if he's got nothing on the mic. That wasn't the case for Warrior, and as recently as Monday night he was there to remind us why even today, there are few, possibly none, that can match his ability to handle a crowd.

There was plenty more we could write, so many memories have we of one of our favourite ever wrestlers. While the character was a big part of our lives growing up, it was an even bigger part of his, as he legally changed his name to Warrior a few years back, and deep down he still had that love for the business and the buzz that he got from appearing in front of a crowd that was chanting his name.

Rest in peace Warrior, you will be missed.

popular
An action-packed thriller is among the movies on TV tonight
Tonight's episode of Love Island features the "most dramatic recoupling ever"
Woman charged over €1.2 million misappropriation of funds at local Credit Union
Gardaí unveil new Armed Support Unit vehicles to replace older models
Taoiseach issues mild rebuke in parting words to Boris Johnson, Mary Lou McDonald goes in two-footed
A serial killer thriller with 100% on Rotten Tomatoes and 5 more movies & shows to watch this weekend
QUIZ: The Ultimate Thor Quiz
You may also like
1 year ago
8 things we're going to miss seeing at our local St. Patrick's Day parade this year
2 years ago
11 painful things that people who work in retail will understand
2 years ago
16 classic toys that every Irish kid growing up in the '90s wanted
3 years ago
These are the 8 lies you tell yourself when you’re on a night out
3 years ago
PICS: These nostalgic images from the '90s will bring anyone back to their childhood
3 years ago
Pics: Every Irish '90s childhood summed up in these nostalgic images
Next Page