One of Ireland’s most successful businessmen and finest players to ever pull on an Ireland jersey,  Tony O’Reilly is also the all-time top scorer for the Baa-Baas and the Lions.

There can be few people anywhere in the world who have enjoyed such success both on and off the pitch and with the Lions series set to be decided this week, it is fitting that we recognise the efforts of the man who has scored 37 tries, more than anyone else in red jersey.

Educated in the rugby hot-bed of Belvedere College, O’Reilly was a keen all-round sportsman, participating in soccer, cricket, tennis and rugby, while also playing youth football for Home Farm.

END_OF_DOCUMENT_TOKEN_TO_BE_REPLACED

It was clear that rugby became his number one sport and won his first cap for Ireland in 1955 and would win the last of his caps 23 caps 15 years later, a Five/Six Nations record he shares with Mike Gibson.

It was a quick rise on the international ladder for the winger, making his Ireland debut in January 1955 and touring with the Lions that summer when they went to South Africa.

That tour he was nothing short of a revelation, scoring 16 tries in 15 games, including two hat-tricks in the warm-up games, while also touching down on his Lions Test debut in front of 95,000 spectators in Ellis Park, a game the travelling party snuck by a single point. The Lions and the Springboks drew the series, but a new star was born. 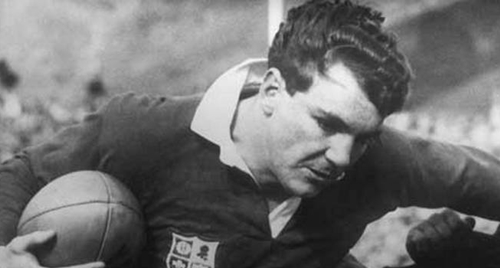 END_OF_DOCUMENT_TOKEN_TO_BE_REPLACED

And if that tour was impressive, then 1959 surpassed his previous exploits.  There were six Tests that year, two against Australia (the Lions won 2-0) and four in New Zealand (Lions lost 3-1) and again O’Reilly was leaving some of the best defenders in the world in his wake.

The Dubliner played an incredible 21 games in red that summer, including all six Tests,  scoring 21 tries in the process to bring his total to 37 tries. It is a record that is unlikely ever to be broken.

Not only did he break scoring records in a Lions jersey, he also left his mark for the Barbarians, making 30 appearances and scoring 30 tries in the famous black and white jersey. Not surprisingly, no one has appeared, or scored more than the Irish international.

And for good measure the man happens to be one of the most successful businessmen the country has ever produced.

Just an all-round success story and one of the finest players to ever pull on a rugby jersey of any colour.

JOE's Lions coverage is brought to you in association with Kelloggs.

popular
James May reportedly hospitalised after crashing into wall at 75mph filming new show
Disney+ has just added 10 big movies to its library
An exciting Irish crime thriller is among the movies on TV tonight
Netflix has just added an incredibly tense 97-minute thriller
QUIZ: You'll need to be razor-sharp to get 100% in this General Knowledge Quiz
The JOE Friday Pub Quiz: Week 307
A great underseen action thriller is among the movies on TV tonight
You may also like
4 months ago
Scottish Parliament official dies during rugby game in Dublin
5 months ago
Every Guinness fan needs to try these brand new experimental beers
6 months ago
"Samaritans saved my life" - Brent Pope praised for honest interview on Tommy Tiernan Show
1 year ago
Craig Casey and Johnny Sexton combination backed for Italy clash
1 year ago
Defence grows for Billy Burns after one of the roughest days of his rugby career
1 year ago
Major upside to Ireland's Six Nations challenge that should make all the difference
Next Page