The Champions League draw as it happened

It was the draw we were all waiting for and it was mixed news for the British teams involved. Here is how it all unfolded.

And that is it from us. Well UEFA milked that for what it was worth, but it has thrown up some intriguing clashes.

Now it's time to award the Player of the Season for last year, with three nominees. Only two on stage however. Ah Ronnie.

'Pat Spillane' adds his tuppence worth on the draw

Easy group for Chelsea, Liverpool not so lucky having been drawn with the Aran Islands and Craggy Islands over 75s all priest team.

And here is the draw. David Moyes won't have it easy in Group A with Donetsk a formidable side at home, while Chelsea will be very pleased with Schalke, Basel and Steaua.

Parkhead will have a few more special nights in store with Milan and Barcelona to travel, along with Ajax, while Arsenal have it all to do with Dortmund, Marseilles and Napoli for company.

END_OF_DOCUMENT_TOKEN_TO_BE_REPLACED

Chelsea will be happy with that, Steaua Bucharest shouldn't put up too much resistance and the second last team out are Viktoria Plezen, who should be cannon fodder in Group D. At least City should get at least two wins this year. Austria Vienna the last team and go into Group G.

Well maybe the group stages is as far as Arsenal will go, they have just got Napoli from Pot Four. What a group that could be. Manchester United get Real Sociedad, and that could be a potential banana skin. Like Group A in general for David Moyes.

END_OF_DOCUMENT_TOKEN_TO_BE_REPLACED

Anderlecht go into Group C that should shee the mega-rich PSG fancy their chances.

And Celtic are out of the pot. And Barca will be on their way back to Parkhead, they just can't get enough.

END_OF_DOCUMENT_TOKEN_TO_BE_REPLACED

Ajax are cluster-fuc*ed again, in with Barcelona and AC Milan, and the dark horses in pot three are in Arsenal's group. Not plum draw. And speaking of, Manuel Pellegrini will be delighted to be in Bayern Munich's group. Basle go into Group E so The Special One can be very happy with what is unfolding in Monaco.

No messing around here. Olympiakos go into Group C, while Galatasaray move into what looked to be the group of death. Maybe not.

Leverkusen are the next German team out and they will be United and Donetsk's opponents in Group A. Zenit officials look stony faced in the crowd, but Group G wasn't too bad. Atletico and Porto for company.

While Michael Owen reminisces about days when he was fit, here is a recap of the draw thus far, with Group B shaping up to be a 'Group of Death' candidate.

Schalke get drawn into Group E, so Jose Mourinho will be pleased with that, while the moneybags at PSG will be with Benfica in Group C. CSKA Moscow got a handy draw, in with the European champions Bayern Munich.

Atletico Madrid, minus the services of Falcao, are in Group G along with Porto.

Ooh, that's a draw, Juventus will join Real Madrid in Group B and Manchester United will make the trip to Donetsk. No easy task that.

So the Gunners get Marseilles as the French outfit are drawn into Group F. Not many Arsenal supporters will be disappointed with that.

Johan Cryuff looks to be enjoying himself, while Luis Figo confirms that AC Milan will play Barcelona in Group H. For the one millionth time in Champions League history by our calculations.

So try and contain yourself, but the teams from pot one have been drawn as follows:

A pensive looking Messi and a somewhat confused looking Ribery in Monaco. Probably trying to figure out why his parents put a c in Frank. No need whatsoever we think he'll find. 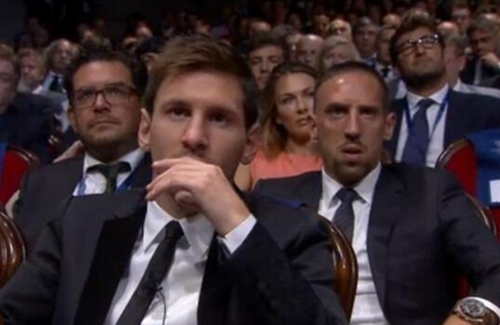 Bayern and Benfica are the next two out. Yes Benfica would be as good a draw as Celtic could hope to achieve from pot one. That or Porto.

Next are Chelski and they are in Group E. We don't want to speculate too much, but Group Es are notoriously difficult to get out of. Gareth Bale's prospective employers Real Madrid are next out, safely placed into Group B.

The boys look to be struggling with their balls, but Arsenal are the first team called out and will go into Group F. A fantastic draw for Arsene Wenger that. And just a reminder that you can see exactly how the draw works right here, but in a nut shell, there are four pots with eight teams, Man Utd, Arsenal and Chelsea are in pot one, Manchester City in pot three and Celtic in pot four, while teams from the same country cannot be paired against each other.

Maybe calling Celtic 'plucky' was not the best move in the world, many of their fans unhappy with that patronising comment. In fairness, Karagandy are no Barcelona. And speaking of, Luis Figo is now on stage. What a player, what a greasy head of hair in his day.   Spurs and Liverpool fans getting a lot of trolling on the Twittersphere, with this particular tweet doing the rounds.

Today is the Champions League draw day. Or as Spurs and Liverpool fans like to call it, Thursday. — ManCityArmy1894 (@ManCityArmy1894) August 29, 2013

Pedro Pinto of CNN is onstage, if there is a bigger smooth talker out there we have yet to hear him. And he is joined by Melanie Vinegar. The very lovely Melanie Vinegar, though she does say the process will take an hour. She does make it all the easier.   The Champions League music has started so we must be getting closer.

Michel Platini is looking rather dapper it must be said while Leo Messi is also pictured in Monaco. And there is a man who knows how to wear a suit. 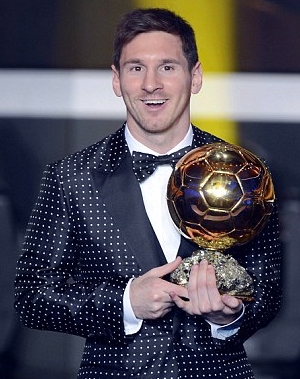 Hello and welcome to the Champions League draw live from Monaco. Unfortunately, we’re not there to cover it, but the office in Dublin will have to suffice. You will have to hit the F5 button to keep the page updated unfortunately, but it should be worth it (no promises at this junture).

For the British teams it will be an anxious wait to see who they will be paired with. Celtic will in Pot four and could have it all to do, while Manchester City are lurking in pot three, so Manuel Pellegrini could well be bracing himself for another group of death. Jose Mourinho will be looking to land another European crown, Arsenal will hope to add some big name signings before the close of the window now that they have reached the group stages while David Moyes will embark on his first campaign proper, leaving aside a dismal qualifying play-off performance a few years back against Villareal.

And the lads in Paddy Power clearly can't contain their excitement.

Hope everyone is prepared for another long, dragged-out Champions League draw. Last year's really took it out of us.. pic.twitter.com/ssSIadrtIP — Paddy Power (@paddypower) August 29, 2013


popular
A Status Yellow snow and ice warning has been issued for the entire country
Take some time to watch the music video for James Blunt's 'Monsters'
The JOE Movie Quiz: Week 38
QUIZ: Name the missing word from these famous Dumb and Dumber quotes
Barry Keoghan has never looked scarier than he does in Calm With Horses
Tommy Tiernan's chat with James Leonard about addiction and recovery is genuinely life-changing
QUIZ: Name the missing word from these famous Derry Girls quotes
You may also like
3 weeks ago
The EA SPORTS™ FIFA 20 Team of the Year has been revealed
3 weeks ago
WATCH: Clinton Morrison stole the show doing punditry this weekend with a moment of brilliance
1 month ago
Here's how you can vote for EA SPORTS™ FIFA Team of the Year
1 month ago
The JOE Friday Pub Quiz: Week 169
1 month ago
Football, beef and the IRA - RTÉ's documentary on League of Ireland players in Libya looks great
3 months ago
Post-match analysis of the Rebekah Vardy/Coleen Rooney beef
Next Page