Footballer of the Year contender and owner of the most famous fringe in the GAA Aidan O’Shea chatted to Elverys about his sporting hero, cinema dates and copying Ciaran McDonald’s style.

Should he end up on the winning side on Sunday, it would crown a memorable season for Aidan O’Shea.

One of the outstanding players in the Championship to date, his hairstyle has attracted national attention and even spawned its own Twitter account and his display against Donegal in the quarter-final was so good that even his sporting hero Brian O’Driscoll publicly praised the Breaffy native.

END_OF_DOCUMENT_TOKEN_TO_BE_REPLACED

Ahead of the All-Ireland Final this weekend, O’Shea sat down with the folks at Elverys to discuss O’Driscoll and some of the inside secrets from the Mayo panel, such as the evolution in Ger Cafferkey’s fashion choices, Michael Conroy’s fondness for cinema dates and Cillian O’Connor’s appeal to the fairer sex.

Elverys: Who’s your all time sporting hero and tell us why?

Aidan O’Shea: Brian O'Driscoll. The reason being he always stands up in games in key moments and when needed most. He’s just a leader without needing to say anything.

Elverys: Who’s been your toughest opponent on the field so far?

END_OF_DOCUMENT_TOKEN_TO_BE_REPLACED

Elverys: Your favourite pair of football boots ever and what do you wear now?

Aidan O’Shea: My favourite boots ever would have the Adidas Predator Mania (White Bottom) and at the minute I’m wearing the blue Adidas Nitrocharge.

Elverys: Best Gaelic Football goal or point of all time?

END_OF_DOCUMENT_TOKEN_TO_BE_REPLACED

Aidan O’Shea: Very hard to pick one. Maurice Fitzgerald, Kerry v Dublin in Thurles from the sideline in 2001 and Ciaran Mc Donald’s point after three minutes of the 2004 All Ireland Final v Kerry.

Elverys: Best sporting occasion you were ever at and why?

Aidan O’Shea: I remember being at the Dublin v Tyrone replay in 2005. It was one of the craziest atmospheres I can remember, I couldn’t hear myself think it was that loud.

Aidan O’Shea: I don’t really have a nickname. Most boys call me Aido or AidoX, the latter coming from my Twitter handle.

Elverys: Biggest joker on the panel?

Aidan O’Shea: We have a few, but at the minute Barry “Big Bird” Moran is the biggest joker. He's always coming up with chants about players and always playing pranks about the place. 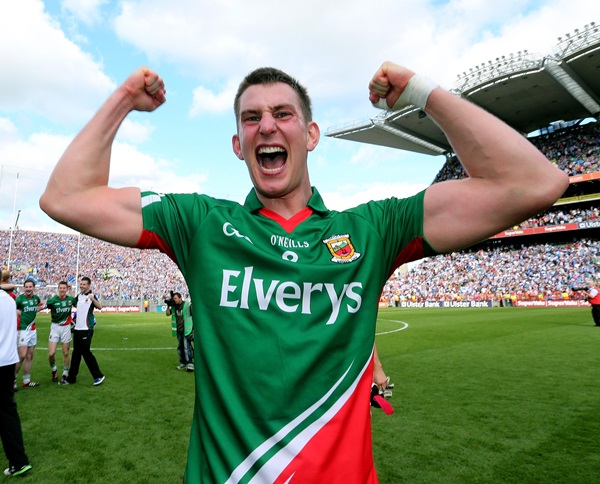 Elverys: Who on the Mayo panel should be reported for crimes against fashion and who’s the next Paul Galvin?

Aidan O’Shea: For crimes against fashion it has to be Andy Moran. His good wife has to do all his shopping for him, but he did go to Kildare Village for a few hours to update the wardrobe.

The next Paul Galvin would be Ger Cafferkey. He has come a long way in the last few years from his Coca Cola & Super-hero t-shirts. He’s become much more cultured after his time in Maynooth.

Elverys: Who on the team reckons he’s the biggest hit with the females?

Aidan O’Shea: This would have to Cillian “Herbert” O'Connor and Mickey Conroy, a great man for a cinema date.

Aidan O’Shea: Well I’m a big fan of Ciaran Mc’s hair styles, so has to be his cornrows. It may be my next style, watch this space…

For similar interviews and content check out Elverys Sports Blog.

popular
Here's how to make €9-11 on Revolut in just a few minutes
Green Party representative calls for a temporary ban of stag and hen parties in Ireland
Pop Idol star Darius Campbell Danesh has died, aged 41
Off-duty Garda arrested in Tipperary on suspicion of drink driving
QUIZ: You won't be able to correctly guess the meaning of all these words
Murder investigation launched following death of 75-year-old woman in Kerry
QUIZ: You'll do well to get 100% in this General Knowledge Quiz
You may also like
10 hours ago
Dublin Bus passenger assaulted in suspected homophobic attack
4 days ago
The 10 must-watch events at the 2022 Dublin Fringe Festival
5 days ago
Don't miss this temporary pop-up night club, coming to Dublin for one night only!
5 days ago
Man charged in connection with death of Sean McCarthy in Dublin
1 week ago
Man in his 20s in critical condition following assault at public transport stop in Dublin
1 week ago
Murder investigation launched after discovery of man's body in Dublin apartment
Next Page