Solid between the sticks for the green and red this summer, Rob Hennelly doesn’t let much pass him by, making him the perfect man to give out all the inside secrets on the Mayo panel.

After a year away from the panel, Rob Hennelly is firmly back in favour in the Mayo goal and has distinguished himself since taking over from the injured David Clarke for the Connacht Final victory over London.

Since then, Hennelly has conceded only one goal – something of a freak effort from Colm McFadden – and managed to get on the scoresheet himself in the semi-final against Tyrone, so don’t be surprised if Stephen Cluxton is the only ‘keeper summoned to take long range frees on Sunday.

END_OF_DOCUMENT_TOKEN_TO_BE_REPLACED

Before that, however, Rob sat down with the lads at Elverys to reveal the inside secrets of the Mayo panel such as what makes Cillian O’Connor so good, the futile attempts to give him a nickname and why he wouldn’t trust the vast majority of the Mayo panel to pick him out an outfit.

Elverys: Who’s your all time sporting hero and tell us why?

Rob Hennelly: There are a few, I was always a big fan of Tiger Woods from when I was younger. In soccer I would have always looked up to Peter Schmeichel growing up, an absolute legend of a keeper. Peter Burke was always a hero for me in the GAA and it’s unreal working with him at training now, funny how things can happen!

Elverys: Your favourite pair of football boots ever and what do you wear now?

END_OF_DOCUMENT_TOKEN_TO_BE_REPLACED

Rob Hennelly: Any of the Adidas Predator Powerswerves with the tongue and strap, they were serious boots, I still have a pair but they’re hard to come by. I’m wearing red Adidas Nitrocharge boots at the moment, they’re nice but I don’t like the yellow stripe across them.

Elverys: Who’s been your toughest opponent on the field so far?

Rob Hennelly: The nature of being a goalie is I don’t have to mark anyone so it’s great! I have played against a lot of good forwards, but the one that always seems to catch me is Cillian O’Connor, he’s a snake in front of goal, always finds a gap!

Elverys: Best Gaelic Football goal or point of all time?

Rob Hennelly: When Michael Donnellan started a move in his own half against Kildare in the 1998 All-Ireland final. He’s one of my favourite footballers of all time and even though he didn’t finish it off, it was his hard run that made it.

END_OF_DOCUMENT_TOKEN_TO_BE_REPLACED

Elverys: Best sporting occasion you were ever at and why?

Rob Hennelly: I was at Sunderland’s opening game of the season in the Stadium of Light the year Roy Keane got them promoted. When Michael Chopra scored the winner the place went mental. I have a feeling the 2013 All Ireland final though could be the pinnacle!

Elverys: What’s your nickname and where did it come from? Who has the best nickname on the panel?

Rob Hennelly: I have no inventive nicknames, Aidan Kilcoyne tried to make Muffin stick on me a couple of years ago but it never materialised!  During my younger years I was referred to as “The Cat” Hennelly, Rob or Robbie is what I’m referred to in general though.

Herbert O’Connor, Anaconda Gibbons, The Big Bird (Barry Moran), Charlie (Cathal Carolan), Zippy (Keith Higgins) are all good ones. I’m trying to get “Hung like Horse” going though if ye can help me out!

Elverys: Biggest joker on the panel?

Rob Hennelly: Barry Moran is a machine, if he’s not flapping his wings, he’s generally flapping his mouth ripping the piss out of someone, 24/7 quality entertainment!  He’s a different animal on the field though thankfully.

Elverys: Who on the team reckons he’s the biggest hit with the females?

Rob Hennelly: Chrissy Barrett and Seamie O’Shea would fancy themselves big time. However, if you’re looking for a wingman I’d stay well clear of Seamie. Direct quote from him: “When it comes to women I ain’t got no friends.” 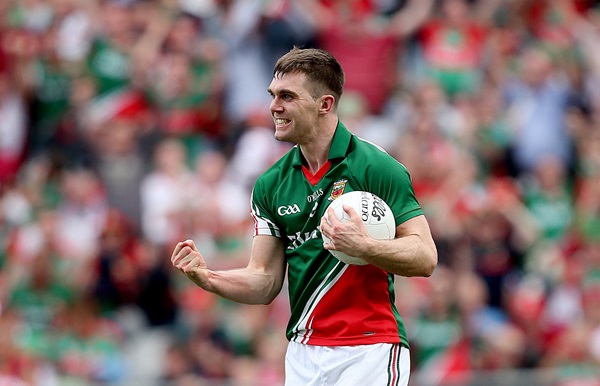 Seamus O'Shea: “When it comes to women, I ain’t got no friends.”

Elverys: Who on the Mayo panel should be reported for crimes against fashion and who’s the next Paul Galvin?

Rob Hennelly: I don’t know if any of the lads would want to be considered the next Paul Galvin for his fashion exploits (football is a different story) but there’s a couple of good dressers.

Ger Caff has improved, Aido knows his way around Zara, but consistently the best dresser would have to be Cathal Freeman, he puts in the effort I’ll give him that. There are too many to mention for crimes against fashion, let’s just say I wouldn’t let 95% of them dress me.

Rob Hennelly: I’d go for a mad hybrid of all three. Picture that.

For similar interviews and content check out Elverys Sports Blog.

popular
Here's how to make €9-11 on Revolut in just a few minutes
Green Party representative calls for a temporary ban of stag and hen parties in Ireland
Pop Idol star Darius Campbell Danesh has died, aged 41
Off-duty Garda arrested in Tipperary on suspicion of drink driving
QUIZ: You won't be able to correctly guess the meaning of all these words
Woman dies and four others injured after crash in Mayo
Dublin Bus passenger assaulted in suspected homophobic attack
You may also like
9 hours ago
Dublin Bus passenger assaulted in suspected homophobic attack
4 days ago
The 10 must-watch events at the 2022 Dublin Fringe Festival
5 days ago
Don't miss this temporary pop-up night club, coming to Dublin for one night only!
5 days ago
Man charged in connection with death of Sean McCarthy in Dublin
1 week ago
Man in his 20s in critical condition following assault at public transport stop in Dublin
1 week ago
Murder investigation launched after discovery of man's body in Dublin apartment
Next Page