Thirty three teams started out the 2013 championship and 60 games later, few would argue that the best two are the ones left standing.

Dublin are looking to make it two wins in three years while Mayo, and possibly most neutrals, are hoping that 62 years of pain can be brought to an end. Both teams have been hugely impressive thus far, racking big tallies on their way to the final in what is the first clash between the two teams at this stage of the championship since 1921.

James Horan and Jim Gavin have been busily plotting each other’s downfall, but here are three key factors that could decide the outcome of the match.

END_OF_DOCUMENT_TOKEN_TO_BE_REPLACED

The Mayo half-back line has been supreme all season, very reminiscent to the Donegal trio last year that laid the foundation for their 2012 success. Lee Keegan, Colm Boyle and Donal Vaughan have not only provided a strong defensive cover, but have been the platform for their own attacks.

Against Donegal, the half-back line scored more than their half-forward line and against Tyrone, Westport native Keegan chipped in with another two valuable points. Considering the half-forward line isn’t prolific, and their midfield duo generally hold the middle, their attacks have been crucial. But how much attacking licence will they be given against the Dubs? 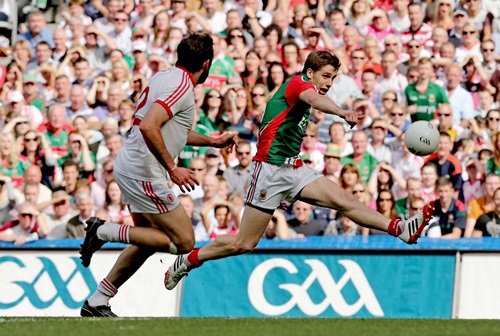 END_OF_DOCUMENT_TOKEN_TO_BE_REPLACED

Tyrone and Donegal operate more defensively than most teams, but Dublin will provide a far different test, with Paul Flynn, Ciaran Kilkenny and Diarmuid Connolly sure to keep the Mayo trio occupied. Kilkenny has grown into the number 11 jersey while Connolly is having the season of his life. This battle on the 40 could well have the single biggest outcome on the destination of Sam.

Battle of the number ones

Generally speaking the battle of the goalkeepers would not be one of the key factors in a game, but Stephen Cluxton and Rob Hennelly will exert more of an influence than most on Sunday.

END_OF_DOCUMENT_TOKEN_TO_BE_REPLACED

The words ‘playmaker’ and ‘quarter-back’ are often bandied about for the Dublin shot-stopper, but he is the launchpad for this Dublin side. Considering the aerial dominance the O’Shea brothers have had for Mayo, his average of one in four kick-outs going long is likely to be increased which could render the midfield battle to one of a running game which would utilise the talents of Michael Darragh MacAuley and Cian O'Sullivan. 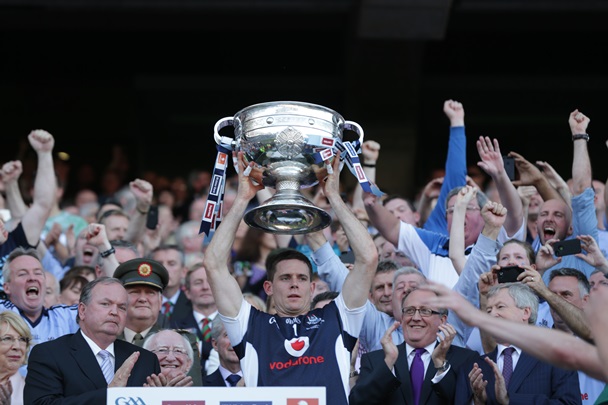 A key member of the Dublin team

Hennelly has taken his opportunity with both hands so to speak and he too looks for the quick restart out the wings to resume play.

And it is at the other end of the pitch where they can also prove the difference. Cluxton is no stranger to taking frees on All-Ireland Final day as Kerry supporters will testify to, and it was noticeable that after a shaky day between the sticks last time out his radar was uncharacteristically a little off by his incredibly high standards. Hennelly too is expected to take the long range frees for James Horan’s men and it is doubtful we have ever seen an All-Ireland with two more influential keepers taking to the field.

Managers and players alike will often speak of every member of the squad playing his part and in the final 10 – 15 minutes this could well be a telling factor. Dublin in particular have utilised the bench incredibly well and Kevin McManamon, Dean Rock, Denis Bastick, Philly McMahon, Eoghan O’Gara and Bryan Cullen have all been chomping at the bit. And All-Stars Alan Brogan and Kevin Nolan haven’t even featured. It really is an embarrassment of riches for Jim Gavin. 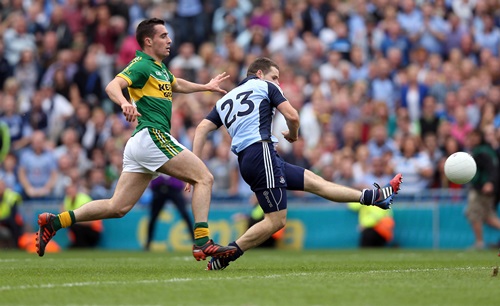 Kevin McManamon doing what he does best against Kerry, scoring after coming on

James Horan has not been so reliant on the replacements given the comfortable nature of their victories, but they too have some talent in reserve with the experienced Richie Feeney and Barry Moran well used to Croke Park and primed for action if called upon. Enda Varley, Cathal Carolan and Jason Doherty provide further options in attack.

Dublin certainly have the advantage here, like they do over just about every county in the country, but Mayo will feel like they won’t be as reliant on the bench as the Dubs. Time will soon tell.