"To all of you who doubted me. Are you doubting me now?"

Welcome to #TrailerChest, where we're taking a sneak peek at the brand new trailer for Notorious. 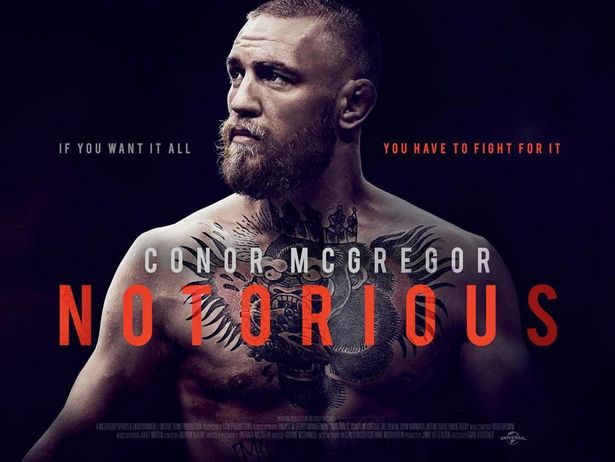 END_OF_DOCUMENT_TOKEN_TO_BE_REPLACED

Plot's it all about? Filmed over the course of 4 years, Notorious is the exclusive, all-access account of Conor’s meteoric rise from claiming benefits and living in his parents' spare room in Dublin to claiming multiple championship UFC belts and seven figure pay-packets in Las Vegas.

Featuring unprecedented access, never before seen moments and explosive fight footage, this is the ultimate behind-the-scenes look at a sporting icon and his spectacular rise from the bottom to the very top.

We've seen plenty of sports documentaries over the years, but they usually involve a retired star looking back over their entire career.

This features McGregor who is still very much in the midst of the height of his fame (or notoriety, if you want to call it that), and doesn't get as far as the now iconic landmark fight against Mayweather.

Always room for a sequel, we guess...

Witness the unstoppable rise of one of the most iconic stars on the planet. Visit https://t.co/TKpBTGiuFV to find out more. pic.twitter.com/pWJc4zrbdA

popular
Here's how to make €9-11 on Revolut in just a few minutes
Green Party representative calls for a temporary ban of stag and hen parties in Ireland
Pop Idol star Darius Campbell Danesh has died, aged 41
Off-duty Garda arrested in Tipperary on suspicion of drink driving
QUIZ: You won't be able to correctly guess the meaning of all these words
Murder investigation launched following death of 75-year-old woman in Kerry
Dublin Bus passenger assaulted in suspected homophobic attack
You may also like
1 week ago
Conor McGregor to make film acting debut in Road House remake
2 years ago
Conor McGregor responds to Paschal Donohoe’s calls to encourage social distancing amongst Irish public
2 years ago
"I was in the wrong" - Conor McGregor apologises over incident in Dublin pub
3 years ago
Charges dropped in Conor McGregor phone-smashing case
3 years ago
WATCH: New footage released of Conor McGregor allegedly smashing fan's phone in Miami
3 years ago
Leo Varadkar and Conor McGregor lead the way in Chicago St. Patrick's Day parade
Next Page