Put simply: one of the worst penalty decisions you'll see this year.

Northern Ireland's hopes of reaching next summer's World Cup were dealt a blow as Switzerland scored an opener in the first leg at Windsor Park from a controversially-awarded penalty.

The Swiss had been the better side in Belfast, but the scores remained goalless with almost 15 minutes of the second half played. At this point, a shot from Stoke City's Xherdan Shaqiri was blocked by the back of Corry Evans. 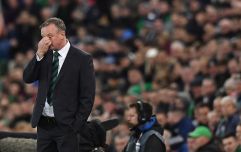 END_OF_DOCUMENT_TOKEN_TO_BE_REPLACED

This, however, was not the way the referee saw it - awarding a penalty for handball by the defender, who also received a yellow card which would rule him out of the second leg in Basel on Sunday.

Ricardo Rodríguez tucked the spot-kick away, enough to hand the Swiss the advantage going into the second leg.

Michael O'Neill's men are still in with a chance of reaching Russia next summer, but an extremely poor piece of officiating might just prove to be costly.