That really was a spectacle at the weekend.

The two biggest fighters on the planet going toe to toe in a boxing match that really wasn't as bad as people expected to be.

END_OF_DOCUMENT_TOKEN_TO_BE_REPLACED

Conor McGregor represented both himself and his country well on Saturday night in Las Vegas but ultimately was beaten by the better boxer, one of the best of all time in Floyd Mayweather.

The Crumlin fighter hosted one hell of an afterparty, a fitting way to conclude one of the biggest events of all time.

While at the afterparty in Las Vegas, McGregor was visited by a fellow Irish sporting hero in Robbie Keane and the pair got down to it.

I kid you not, Conor McGregor & Robbie Keane where in deep conversation for most of the night. 2 Irish legends right there. @EncoreBeachClub pic.twitter.com/E5plb5jrHh

There was also John Kavanagh dancing.

Just like New York last Nov this was my favourite moment of the Conor McGregor after party. There's only one @John_Kavanagh. #DanceOrLearn pic.twitter.com/gJGYhf11jQ 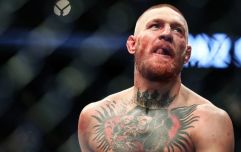 END_OF_DOCUMENT_TOKEN_TO_BE_REPLACED

It wouldn't be all that surprising to know that if you were Irish and well known you probably would have made the cut for the after party and one such man that did was Rob Lipsett.

Lipsett recently appeared on hit TV show Love Island and is a famous Youtube and Instagram star having amassed over 600,000 followers between the two social media sites.

The fitness star tweeted that he was at the weigh in on Friday.

But went one better as he got the meet the man of the moment after the fight.

As if it weren't enough and because after months and months of hard training means that the session keeps on going Lipsett got yet another photo with The Notorious 15 hours later.

The Big Reviewski || JOE · The Big Reviewski with Andy Serkis, Squid Game follow-ups & the return of Succession
popular
Claire Byrne was having absolutely none of Nigel Farage's claims on Monday night
Netflix has revealed the release date for new episodes of Ozark
Confusion reigns over social distancing element to nightclub reopening plan
An underrated Denzel Washington thriller is among the movies on TV tonight
CONFIRMED: Nightclubs to reopen, weddings at full capacity and Covid Passes to remain
Man in his 60s killed following fatal road traffic collision in Monaghan
Largest aircraft in the world touches down at Shannon Airport
You may also like
2 years ago
Notorious is just another cog in Conor McGregor's money-making machine
3 years ago
McGregor can't sell his branded sportswear in Ireland following court ruling
3 years ago
Images of McGregor's team members were posted around UFC 223 with the words "Access Denied"
3 years ago
WATCH: Latest HD footage from bus attack shows full extent of McGregor's carnage
4 years ago
Conor McGregor's loss to Floyd Mayweather has been linked to 'mild traumatic brain injury'
4 years ago
Owen Roddy talks about the aftermath of McGregor's loss on The Late Late Show
Next Page