It is just over a week since Orlando, Florida was devastated by the largest mass shooting in modern American history.

By the end of the night, 49 patrons of the club had lost their lives and another 53 were injured, while the gunman himself was shot by police. 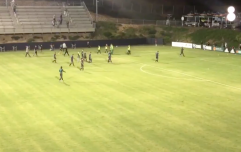 END_OF_DOCUMENT_TOKEN_TO_BE_REPLACED

It was the deadliest mass shooting by a single gunman in the country's history, and it came just one night after singer Christina Grimmie was shot and killed during a performance in the same city.

On Saturday night of this week, MLS side Orlando City SC hosted their first home game since the shootings and paid tribute to the victims. First, they kept seats free ahead of their meeting with San Jose in honour of the dead, tying balloons of various colours to the seats instead.

Honoring the 49 victims of the Pulse Shooting and Christina Grimmie.#OrlandoUnited pic.twitter.com/gJNBtcbUWu

In addition to this, the corner flags sported rainbow flags associated with the LGBT movement in a show of solidarity with the community.

Then, as the clock ticked over to 49 minutes during the game, players and fans paused for a moment of silence in memory of those who had lost their lives in the city over the past few days.

A moment of silence in honor of the 49 victims of the Orlando tragedy #OrlandoUnited https://t.co/H3JaNjsfiI

May they rest in power.

The Big Reviewski || JOE · The Big Reviewski with Andy Serkis, Squid Game follow-ups & the return of Succession
popular
The JOE Friday Pub Quiz: Week 265
PICS: The man with the biggest penis in the world has one unbelievable problem with it
The 50 most iconic songs of all time* have been revealed
Warning after person has bank account cleared out hours after scam text
Ryanair is seeking applicants for "the worst job in Ireland"
A scene by scene analysis of the most uncomfortable moment in Come Dine With Me history
National Lottery reveals 28 locations where tickets worth over €35,000 each were sold
You may also like
4 months ago
20 of the best LGBTQ+ movies you can watch at home right now
6 months ago
Baker who refused to serve gay couple now being sued for refusing to bake gender transition cake
1 year ago
Fermoy terminates twinning arrangement with "LGBT-free" town in Poland
1 year ago
Graham Linehan permanently suspended from Twitter
2 years ago
WATCH: Dublin Bus publish delightful video focusing on Ireland's older LGBT people for Pride
2 years ago
TD says STI clinics are over capacity
Next Page