A Kildare customer has won big in their local BoyleSports outlet this week after they picked Billy Horschel to win the AT&T Byron Nelson golf tournament and Alvaro Quiros to win The Rocco Forte Open.

The anonymous customer had €2.50 each way on both golfers at 125/1 as well as a €2.50 each-way double, bringing the total stake up to €15. Both golfers won their respective tournaments at the weekend.

END_OF_DOCUMENT_TOKEN_TO_BE_REPLACED

After Jason Day’s par putt veered left for a bogey that handed the AT&T Byron Nelson to Billy Horschel on Sunday evening, the relieved champion told the former number one player in the world that that wasn’t the way he wanted to win.

In addition to his chat with Day, he posted this tweet a couple of hours after his victory which shows how much of a graceful winner he is...

What a week at @attbyronnelson. Feel for my man @JDayGolf. So thankful for all your support over the last few weeks! pic.twitter.com/uSBlfJkaOl

END_OF_DOCUMENT_TOKEN_TO_BE_REPLACED

But it was the second golfer who really pulled through for the anonymous punter. Alvaro Quiros hadn't won a tournament since 2011.

And it looked as though he had blown his chances in this tournament again after he wasted a seven-shot lead at 2o under par.

It was an ugly finish in the end, but ugly or not, they all count.

It's been six long years, but Álvaro Quirós is finally back in the @EuropeanTour winner's circle! He wins the #RoccoForteOpen in a playoff. pic.twitter.com/2fWvIy5Ppn 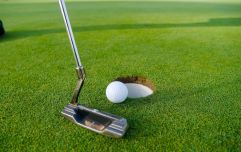 END_OF_DOCUMENT_TOKEN_TO_BE_REPLACED

“Hats off to the eagle eyed customer for picking both golfers to win at such big odds. They certainly have BoyleSports in the bunker on this occasion,” said BoyleSports spokesperson Liam Glynn.

Glynn also noted that the customers' nails must be a lot shorter after both golfers had to go to the play-offs to win their tournaments.

popular
Amazon Prime Video has just added 38 very big movies to its library
We just got the first trailer for a movie not out until 2024
The Banshees Of Inisherin is arriving on Disney+ sooner than you might expect
5 must-watch shows and movies streaming on NOW in December
Kirstie Alley: Cheers star dies aged 71
Mia Khalifa claims seaside town is better than Miami
Simpsons writer has explanation for the show being able to predict so many major events
You may also like
3 years ago
Who will sit on the Iron Throne? Odds revealed on the big question in the final season of Game of Thrones
5 years ago
Irish punter turns a tenner into €78,000 after 33,000/1 and 1,500/1 bets pay off
5 years ago
Mystery punter in Cork wins over €82,000 after bet comes in at odds of 33,000/1
5 years ago
Cork man is waiting on one more bet to win €250,000 in an accumulator
5 years ago
Lucky Irish punter claims a whopping €95,000 from a 50 cent bet
1 week ago
England fans in crusader costumes banned from entering Qatar stadiums
Next Page