There are two types of football fans during this World Cup. Those that love Brian Kerr's commentary and those that are completely wrong.

Ok, we're aware that Kerr can divide opinion but we're 101% firmly of the opinion that he's one of - if not THE - greatest co-commentator that's currently behind a mic.

END_OF_DOCUMENT_TOKEN_TO_BE_REPLACED

Where else would you get lines like "For a fella that once played as a banger for Real Madrid in a Copa Del Rey match, he certainly banged that one in," "looks like he's banjo'd now alright," or the utterly brilliant "he went down like a big whinge-bag."

On a serious note, Kerr's expertise, knowledge and passion for the game is second to none and as we've previously stated, it's criminal that he doesn't have a position within the FAI - read into that what you will.

Basically, we think that these two tweets perfectly sum up how we feel about the former Ireland and Faroe Islands manager and if you're a gambling man or woman, Paddy Power have an absolutely perfect market for you ahead of the England vs Croatia semi-final.

Brian Kerr has been the real star of the #WorldCup so far! 😂 pic.twitter.com/qxvgpMGGRe

I won’t lie, I would pay a small sum of money to have Brian Kerr’s voice direct me on Google Maps.

As they frequently do, the bookmaker are having a bit of fun ahead of the meeting between the English and the Croats because you can now place a bet on what Brian Kerr will actually say during commentary.

END_OF_DOCUMENT_TOKEN_TO_BE_REPLACED

Granted, each to their own when it comes to making a decent bet but we're confident that the words 'banjoed' and 'battered' will make an appearance.

FYI, if the top brasses at RTE are reading this, can you please let Brian Kerr commentate on the Eurovision, Rose of Tralee and every other show that's going to be broadcast?

Here's a look at some of the bets that you can place here. 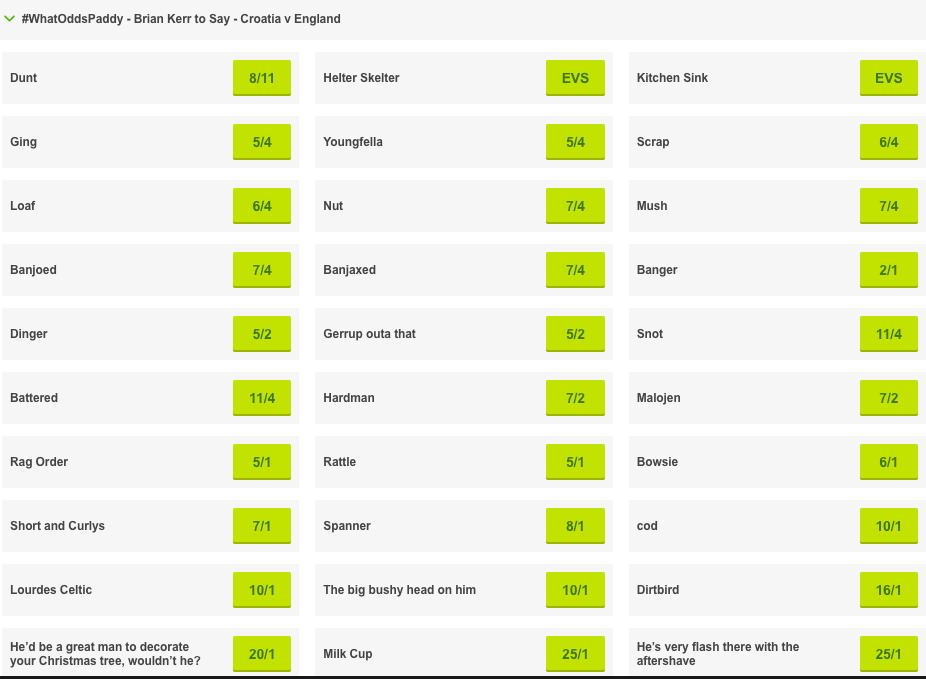