His condition has been described as 'debilitated'

Legendary Brazil star Pele has been rushed to hospital after his health reportedly deteriorated.

According to ESPN Brasilia, the 82-year-old was admitted to a hospital in Sao Paulo with swelling all over his body. 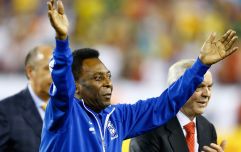 END_OF_DOCUMENT_TOKEN_TO_BE_REPLACED

Pele, who is currently undergoing treatment for metastatic cancer, went into the Albert Einstein hospital on Tuesday in what was an unscheduled visit after being taken by his wife Marcia Aokoi and a carer.

Medical staff at the hospital confirmed his condition of anasarca (general swelling), an edemigemic syndrome (general edema) and even identified 'decompensated heart failure'.

ESPN Brasilia have described the former footballer's condition as "debilitated."

It is also reported that the chemotherapy treatment he is undergoing for cancer is no longer working, and that he was diagnosed with mental confusion upon entering the hospital, where he was restless.

He is due to undergo tests to assess the seriousness of the medical issues detected.

Pelé has been hospitalized in Brazil and his condition is ‘worsening,’ per @ESPNBrasil pic.twitter.com/vQPkv4MGmP

But Pele's daughter Kely Nascimento, who is not in Brazil with her father, has tried to ease concerns over her father's health by saying there is "no emergency." 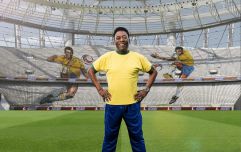 5 of Pele's greatest ever goals

END_OF_DOCUMENT_TOKEN_TO_BE_REPLACED

She wrote in a post on Instagram: "Lots of alarm in the media today concerning my dad's health. He is in the hospital regulating medication.

"There is no emergency or new dire prediction. I will be there for New Years and promise to post some pictures."

Officials at the hospital have not commented on his health, and while his wife Marcia did confirm the Brazil icon was in hospital, she implied it is only for his standard chemotherapy and check-ups.

Pele's agent Joe Fraga said he did not have an update on the former Brazil forward's status, MailOnline reports.

The Brazilian is widely considered to be one of, if not the, greatest footballers in history and is the only player to win three World Cups.

popular
The Last Of Us Episode Five will premiere days earlier in Ireland and UK
Amazon Prime Video has just added 21 big movies to its library
Shock as blues singer beats Adele, Beyonce and Taylor Swift to win Song of the Year Grammy
5 years ago, Hollywood took a massive gamble on a huge sequel... and lost big time
One of the best crime thrillers ever is among the movies on TV tonight
Ben Affleck's bored expression at the Grammys becomes a meme
Netflix has just added 12 very big movies to their library
You may also like
2 months ago
Football legend Pelé reportedly begins end-of-life care in hospital
2 years ago
Watch the official trailer for Netflix's hotly anticipated Pelé documentary
2 years ago
A documentary about Pelé is coming to Netflix next month
5 years ago
10 interesting facts about Pelé that you probably didn't know
5 years ago
COMPETITION: Fancy a once in a lifetime chance to meet and train with Pele?
5 years ago
Pele's son turns himself in to serve a 13-year prison sentence
Next Page