Pic: A seemingly impossible yet absolutely hilarious photograph from an indoor Gaelic Football tournament in Toronto

How the hell did this even happen? You’ve got to hand it to the photographer though, this is perfect timing in fairness.

Although it is true of nearly every sport, the GAA tends to lend itself to particularly spectacular action photos, whether it be a midfielder soaring above a swarm of bodies below to make a stunning catch or a hurl being split or bent dramatically out of shape when a player tries to pull on a high ball dropping from a puck-out in the small ball game.

Like all sports, it also lends itself to some hilarious photos that are the product of nothing else but perfect timing, as was the case in a recent indoor Gaelic Football tournament in Toronto.

The photo below was sent into us by Phil Gill, who was actually playing in the game and was hoping we could help him explain how in the hell the action shot came to pass. 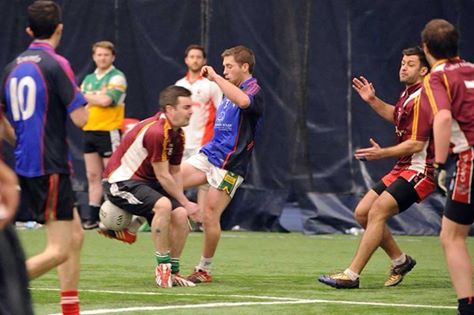 END_OF_DOCUMENT_TOKEN_TO_BE_REPLACED

Apart from the obvious explanation was that the defender in question was trying to purposely block the ball with his arse we can’t think of many other reasons; maybe he sh*ts O’Neill’s footballs on a regular basis or it was a result of a forfeit similar to the one forced on Father Ted when he had to kick Bishop Brennan up the arse, with the roles reversed on this occasion, of course.

We might not know what’s going on but we certainly got a great kick out of it all the same; we’ve heard of putting your body on the line for the team but this is taking it to a new and completely disturbing level altogether.

Hat-tip to Phil Gill for sending this one our way

The Big Reviewski || JOE · The Big Reviewski with Y: The Last Man, that Malignant ending & a secret streaming service
popular
The 50 most iconic songs of all time* have been revealed
Ranking the 10 most passive-aggressive ways to end a text conversation
PICS: The man with the biggest penis in the world has one unbelievable problem with it
Almost 25 years on, one of the stars of Face/Off tells a personal Nic Cage story
"One person's rent is another person's income" – Varadkar rejects calls for three-year rent freeze
You could be shopping in an Aldi store with no checkouts in Ireland in the near future
People think they've figured out the ranking of the viewers on your Instagram Stories
You may also like
11 months ago
Post-match celebrations and a lack of social distancing at certain events put club game on hold
11 months ago
Cork GAA pleads with clubs and supporters “not to engage in celebrations that breach current guidelines”
1 year ago
What's the Bronco test and why it may come up in conversation this week
1 year ago
The Andy Moran GAA Isolation Workout
1 year ago
SuperValu, Centra and the GAA team up on initiative to support elderly people
1 year ago
Meath GAA club confirm adult player has tested positive for coronavirus
Next Page