Pic: Brazilian newspaper gets its priorities right with this front page on Brazilian Cup Final day

Nothing else is of importance in Brazil today it seems.

It's the second leg of the Brazilian Cup Final tonight between league winners Cruzeiro and Atletico Mineiro. Atletico lead 2-0 from the first leg, but Cruzeiro are confident of pulling the deficit back on home soil and securing the Brazilian domestic double.

The Cruzerio club are based in the Brazilian city of Belo Horizonte and the local newspaper is ready for the big match. Judging by their front page, nothing and we mean, nothing else matters... 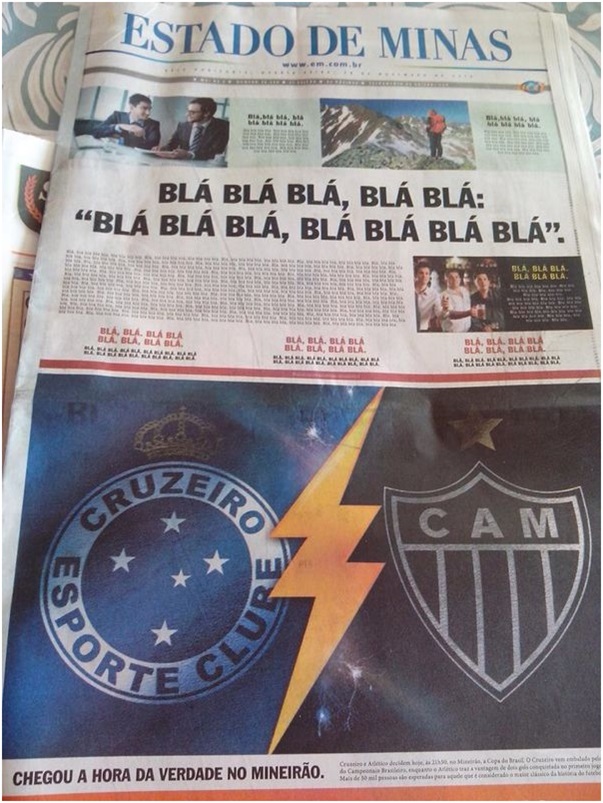 The late, great Bill Shankly might have been going over the top when he famously said, 'Football is not a matter of life and death. It's much more important that that,' but it appears that a similar sentiment is prevalent in Brazil today.

House of Rugby Ireland · Ireland's feel-good win, Casey's initiation song, scrapping Sexton and Scott Williams interview
popular
Eoghan McDermott to leave RTÉ after six years (Report)
€17,500 worth of cocaine found at street party in Limerick
Sony are giving away a free game to all PS4 and PS5 owners
25 more people with Covid-19 have died in Ireland, 566 new cases
One man has been charged following Limerick street party, 50 FPNs issued
NUIG students told to write 2,000 word essay for breaching Covid rules
One of the most fertile men in Ireland is a guest on tonight's Claire Byrne Live
You may also like
6 days ago
TOWIE star Mark Wright is officially the worst player on FIFA 21
3 weeks ago
Jamie Carragher reacts to hilarious TikTok remix combining on-air yelp with John Legend song
3 weeks ago
Roy Keane reacts to the dancing Keano FIFA TikTok meme
3 weeks ago
Watch the official trailer for Netflix's hotly anticipated Pelé documentary
1 month ago
A documentary about Pelé is coming to Netflix next month
1 month ago
Mum's anger at state of £30 free school meals package in the UK
Next Page