Pic: Brilliant graphic shows how effective Messi, Suarez and Neymar are playing together

The triumvirate of terror.

We are all now starting to realise how good the Barcelona front three are when on the same pitch at the same time.

We've seen it time and time again this season and last night in Munich, both Neymar's goals were set up by Suarez (with some assistance from Messi) in another devastating example of their effectiveness.

The three South Americans work almost telepathically with each other although, as this Fox Sports graphic shows, Neymar still hasn't created a goal for Suarez yet.

He has, however, created nine of Messi's goals. 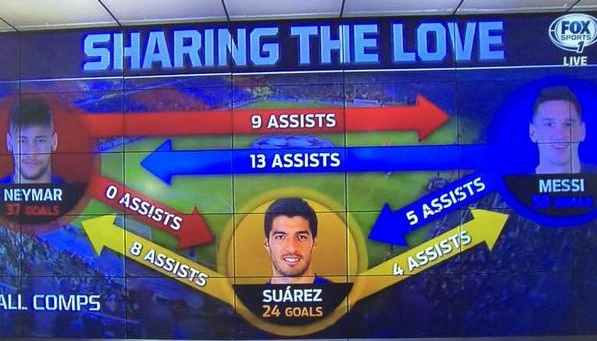 Suarez, on the other hand, has set up eight of Neymar's goals this season.

You'd think the Brazilian would be busting a gut to reciprocate the Uruguayan's generosity?

Maybe he's saving it for the Champions League Final.

The Big Reviewski || JOE · The Big Reviewski with Y: The Last Man, that Malignant ending & a secret streaming service
popular
One of the most-anticipated movies of the last few years is finally available to watch at home this week
The 50 most iconic songs of all time* have been revealed
PICS: The man with the biggest penis in the world has one unbelievable problem with it
Almost 25 years on, one of the stars of Face/Off tells a personal Nic Cage story
Simon Harris and wife welcome arrival of new baby boy
Government announces special €1,860 payment for laid-off workers during pandemic
People think they've figured out the ranking of the viewers on your Instagram Stories
You may also like
3 weeks ago
Manchester City's Benjamin Mendy charged with four counts of rape
1 month ago
Michael Ballack’s son Emilio, 18, dies in 'quad-bike crash’
1 month ago
Five football documentaries to watch to kill time before the new Premier League season
3 months ago
Christian Eriksen stable but may not play football again, says sport cardiologist
4 months ago
Ryan Giggs charged with assaulting two women and controlling or coercive behaviour
5 months ago
Martin Compston reveals moment he delayed Line of Duty filming to watch Scotland penalty shoot-out
Next Page