Pic: Here's the full version of that crazy Carl Froch/Anthony Joshua pic that has been doing the rounds

Twitter has been going to a bit mad over a picture that shows heavyweight prospect Anthony Joshua dwarfing man-of-the-moment Carl Froch. Here's the full picture.

Yesterday afternoon, this picture started circulating all over the Twitter machine.

END_OF_DOCUMENT_TOKEN_TO_BE_REPLACED

In fairness, Anthony Joshua does make Carl Froch look like a little boy here but Joshua is 6'6", well over 100kg and one of the most intimidating boxers to emerge in recent years. Froch, while clearly one of the best boxers of his generation, fights at super middleweight and stands just over six foot.

Here's the full picture, taken from Joshua's Facebook page where he posted it on May 15. 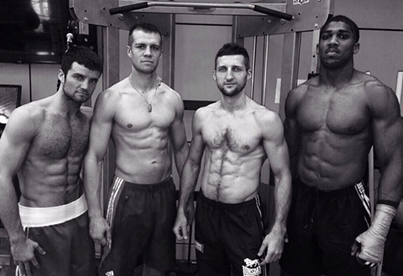 Not quite as scary but it shows that when it comes to boxing, there are few scarier prospects in the heavyweight division right now the 2012 Olympic champion.

popular
QUIZ: Test your knowledge of Gogglebox
Leo DiCaprio's only Oscar-winning performance is among the movies on TV tonight
Irish employment law experts warn employers must find ways for staff to take entitled leave
First photos emerge of Boris Johnson drinking at Downing Street party during lockdown
RTÉ's new show is looking for the best takeaway in all of Ireland
EXCLUSIVE: Ewan McGregor and Hayden Christensen on reuniting on the set of Obi-Wan Kenobi
You may also like
4 weeks ago
Man punched by Mike Tyson on plane explains his side of the story
1 month ago
Mike Tyson breaks silence after punching passenger on flight
1 month ago
Mike Tyson filmed repeatedly punching passenger on airplane
9 months ago
Round up of the best tweets as Irish people all over the world celebrate Kellie Harrington's Olympic win
1 year ago
Brawl erupts between Floyd Mayweather and Jake Paul at press conference
1 year ago
Kate Abdo steals the show at Garcia-Campbell with bizarre compliment
Next Page