One Australian woman will surely be doing just that after falling victim to a robbery – where the chief suspect is someone in her own Facebook friends list.

Chantelle, from Perth, Australia, was so excited by her bet at the Melbourne Cup coming in that she shared her excitement by posting a selfie with the winning ticket.

But the Australian’s celebrations were short-lived after someone used the barcode on the winning ticket to claim the $825 (£383) prize. 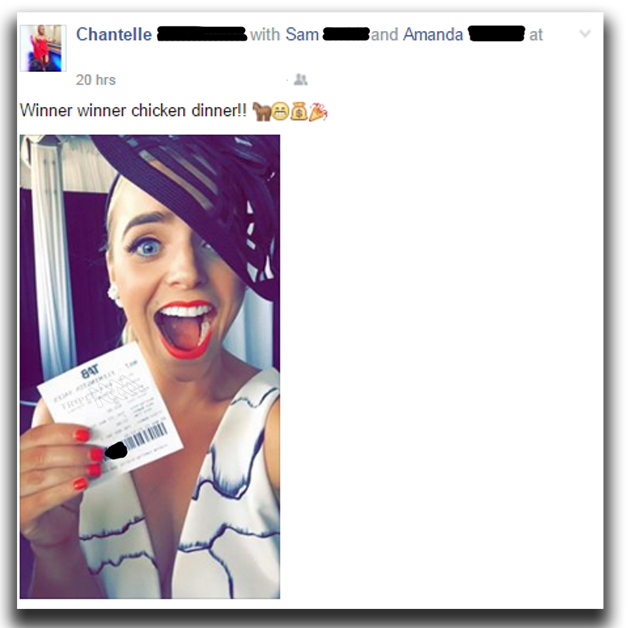 END_OF_DOCUMENT_TOKEN_TO_BE_REPLACED

“To the low life who is obviously my friend on Facebook and used my photo to claim our winnings. You’re a massive d*ck. You ruined my day.”

Speaking to Triple M Sydney radio station, she said the station police have tracked where the prize money was claimed and are now tracing the culprit.

We're betting on a full-scale war when the truth comes out.

While the radio station compensated her the $20 she originally spent on buying the ticket, it’s safe to say Chantelle probably feels like she’s already paid the price for her mistake.

popular
Amazon Prime Video has quietly added 18 big releases to its library
Large crowds gather outside Tullamore courthouse as man charged with murder of Ashling Murphy
Over 80% of people working from home could be missing out on €100 tax relief
WATCH: This foul-mouthed argument proves the Irish language is alive and well
Here's the line-up for this week's Late Late Show
A gripping '90s thriller is among the movies on TV tonight
60 jobs available on Stena Line with 50% of your time spent not working
You may also like
2 years ago
Who will sit on the Iron Throne? Odds revealed on the big question in the final season of Game of Thrones
4 years ago
Irish punter turns a tenner into €78,000 after 33,000/1 and 1,500/1 bets pay off
4 years ago
Kildare punter nets big from outrageous golf bet
4 years ago
Mystery punter in Cork wins over €82,000 after bet comes in at odds of 33,000/1
4 years ago
A Dublin punter has just won big with this outrageous golf bet
4 years ago
Cork man is waiting on one more bet to win €250,000 in an accumulator
Next Page