Pic: How the hell did the fog-covered Offaly Minor Hurling Final go ahead yesterday

Common sense prevailed in the end.

How the game went ahead though is a bit of a mystery because conditions in the Faithful County were brutal.

Check out this picture that was sent into us. 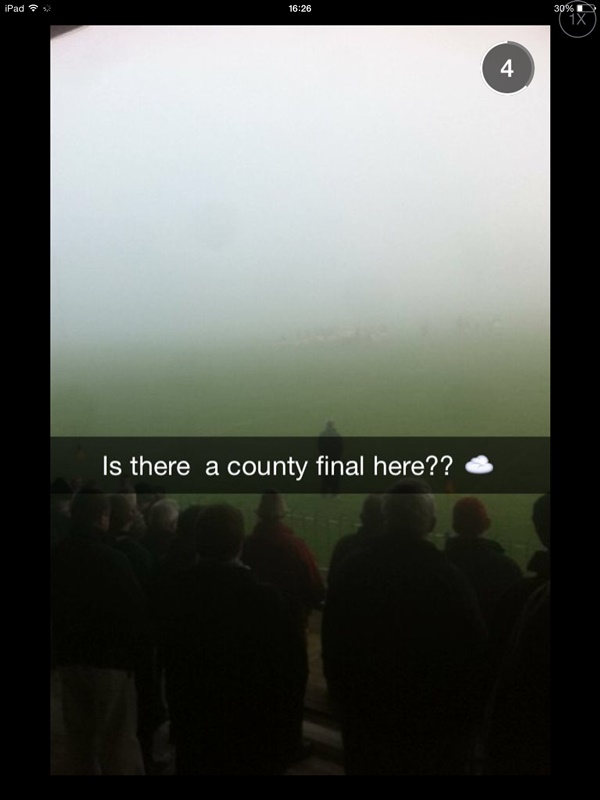 END_OF_DOCUMENT_TOKEN_TO_BE_REPLACED

The game was abandoned at half-time with the sides tied at 0-04 a-piece although we've no idea how either team managed to score.

Kilcormac Killoughey posted on their Facebook page after the game.

"Common sense prevails and the match is abandoned at half time due to the heavy fog. Match will be refixed for same venue at a later date with free admission."

popular
Public urged to be wary of sophisticated Revolut scam in operation in Ireland
'The Beast' apologises for storming off after losing on The Chase
A gripping mystery thriller is among the movies on TV tonight
QUIZ: Can you identify the countries that have blue, red and white as the colours of their flag?
Amazon Prime Video has just added 16 big movies to its library
Man charged following incident involving deceased man at Carlow post office
40% of Irish workers without a pension say they "can't afford" one
You may also like
3 months ago
Wicklow GAA to investigate fight after Under 15 match on Saturday
1 year ago
Post-match celebrations and a lack of social distancing at certain events put club game on hold
1 year ago
Cork GAA pleads with clubs and supporters “not to engage in celebrations that breach current guidelines”
1 year ago
What's the Bronco test and why it may come up in conversation this week
1 year ago
The Andy Moran GAA Isolation Workout
1 year ago
SuperValu, Centra and the GAA team up on initiative to support elderly people
Next Page