Pic: Junior B hurling manager sends brilliant Game of Thrones-themed text to get players ready for the new season

Much like winter, the Championship is coming. Get ready for a battle lads.

The grand stretch in the evenings and smell of fresh cut grass can only mean one thing in GAA circles; the season is about to really crack into gear, Championship is fast approaching and woe betide anyone who’s not ready for war.

The managers of The Harps Junior B hurling team in Durrow in Laois are acutely aware of the need to have their lads primed for battle for the beginning of the season this weekend and in an effort to channel the inner warrior inside all of their players, they sent the following Game of Thrones-themed text to their players ahead of the much-anticipated clash with Shanahoe this afternoon. 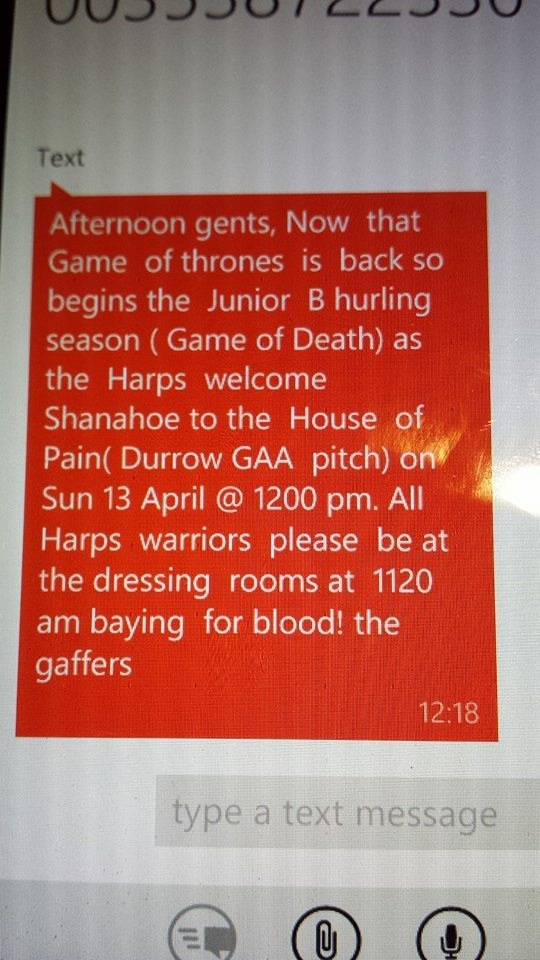 END_OF_DOCUMENT_TOKEN_TO_BE_REPLACED

No doubt the text will have the desired effect and the Harps lads will have been baying for blood before the throw-in, but let’s just hope that they avoided a Red-Wedding style killing spree in a full-blooded and good spirited championship clash.

Hat-tip to John Holland for sending this one our way

popular
People want "offensive" Crown Paints advert banned after attracting hundreds of complaints
Netflix has just added 23 very big movies to its library
Human remains found in suitcases are the bodies of two children
The prequel to one of the best twists of all time and 7 more movies & shows to watch this weekend
Disney+ has just added 10 big movies to its library
A terrific '90s crime drama is among the movies on TV tonight
Robert Troy apologises and submits seven amendments to correct the record
You may also like
1 month ago
Looking for a hotel room for the All-Ireland Final weekends? It won't come cheap...
1 month ago
Taoiseach condemns "disturbing" fight at Galway v Armagh game
2 months ago
The 2 Johnnies share unbelievable catfish ordeal affecting over 40 people
3 months ago
Limerick hurler arrested following alleged altercation with Tipperary player in Limerick pub
3 months ago
Woman in her 20s dies after accident during Camogie match
10 months ago
Wicklow GAA to investigate fight after Under 15 match on Saturday
Next Page