A perfectly framed in-game shot of all five Indiana Pacers around the basket, with the huge stands of Bankers Life Fieldhouse looming over them. Majestic.

Last night in Indiana the defending NBA champions the Miami Heat beat the Indiana Pacers 87-83 to tie up the Eastern Conference finals at one game all.

It was a low-scoring, but seriously intense game, as these two teams *cliche alert* really don't like each other.

END_OF_DOCUMENT_TOKEN_TO_BE_REPLACED

Anyway, photographer Ron Hoskins captured the prettiest picture of the basketball year at the game when he snapped Pacer Paul george snaring a rebound. With his team-mates perfectly flanked, superhero movie style, on either side of him, and with a packed stadium all around, it's just a beautiful shot.

By the way, the main picture, of Norris Cole splitting the Pacers defence, is pretty damn cool too. 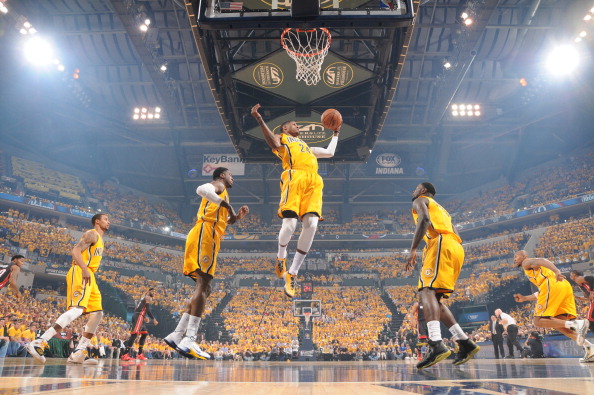 popular
Harvard study reveals how many times men should ejaculate each month to stay healthy
Parents left in shock after gorillas start mating in front of kids at zoo
Colin Farrell shouldn't win the Oscar this year
Conor Mcgregor hit by car ‘at full speed’ while cycling
The JOE Friday Pub Quiz: Week 331
Man wins $1m on lottery ticket after someone pushed in ahead of him in queue
Close call as Paul McCartney tries to pose on Abbey Road crossing
You may also like
7 years ago
Video: Galway lad lands slick trampoline trick shot using an American football
7 years ago
Pic: A very funny mistake in this US newspaper headline should give you a laugh
7 years ago
Video: Irish people watch lacrosse for the first time and explain why it’s nothing like hurling
7 years ago
Pic: WWE’s Triple H plans to eat this mountain of food over 3 days
7 years ago
Video: College footballer performs 40-inch box jump while holding two 32kg dumbbells
7 years ago
Video: The latest People Are Awesome compilation features some unbelievably talented kids
Next Page