PIC: This man wasn't going to let his son's wedding stop him watching his county play

When your son's getting married, but GAA is life...

GAA is form of religion in Ireland. Any word against it is considered blasphemy in many parts of the country.

Kevin O'Neill from Cullyhanna in Armagh is a staunch GAA man. He attends as many of his club and county games as he possible can.

END_OF_DOCUMENT_TOKEN_TO_BE_REPLACED

But last weekend when Armagh took on Kildare in the final round of the All-Ireland Qualifiers, Kevin was absent from Croke Park, but he had a very good reason.

He was attending his son, Rory's, wedding on Saturday and couldn't make the trip from Armagh to Croke Park.

As luck would have it, the wedding dinner would also clash with Armagh's game and it looked like the Father of the Groom would have to miss the match in order to be present at the meal and speeches.

But that wouldn't stop Kevin from seeing the match, meal or no meal, he set up his phone against a wine glass and watched the action unfold in Croke Park. 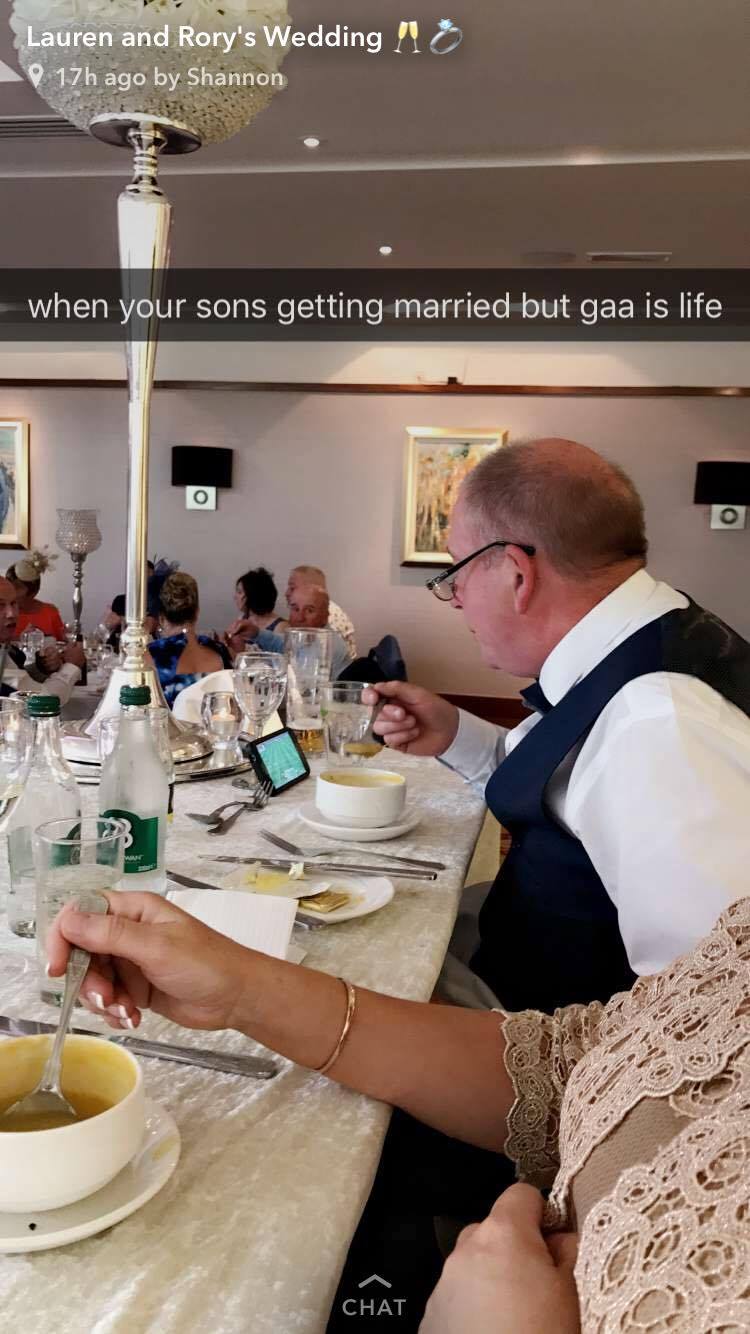 END_OF_DOCUMENT_TOKEN_TO_BE_REPLACED

But while he watched the opening 35 minutes on the small screen, the meal ended, meaning he and Rory could retreat to the bar and watch the second half on a normal sized screen.

Armagh emerged victorious, and speaking to JOE, Rory told us his father was jubilant at the result.

"Ya couldn't beat that in there [sic]," Kevin said to his newly married son.

Kevin will be sitting anxiously in Croker this Saturday and will be hoping his side can overcome rivals Tyrone to book a place in the semi-final.

popular
Nicola Bulley's phone found by the river 'could be a decoy', diving expert suggests
Teenager killed in shark attack after swimming with dolphins in Australia
The Last Of Us Episode Five will premiere days earlier in Ireland and UK
5 years ago, Hollywood took a massive gamble on a huge sequel... and lost big time
Shock as blues singer beats Adele, Beyonce and Taylor Swift to win Song of the Year Grammy
Amazon Prime Video has just added 21 big movies to its library
Ben Affleck's bored expression at the Grammys becomes a meme
You may also like
3 months ago
Brendan Óg Duffy's father speaks powerfully about his son's death
3 months ago
Gardaí investigating alleged assault on under-9 GAA player at children's sports event
5 months ago
Roscommon GAA confirms investigation into alleged assault on referee during juvenile game
6 months ago
Looking for a hotel room for the All-Ireland Final weekends? It won't come cheap...
7 months ago
Taoiseach condemns "disturbing" fight at Galway v Armagh game
8 months ago
The 2 Johnnies share unbelievable catfish ordeal affecting over 40 people
Next Page