PIC: Meath nan sends brutally honest text to grandson after he scored 1-6 in a game

The honesty that only a nan could have...

If there's one thing you can bank on, it's the unconditional love from your grandparents, even if they do think you're wee shite at times.

Brian O'Connell (son of the team of the Millennium member, Martin O'Connell) had a storming weekend for his club Walterstown when he clocked up a tally of 1-6 for them in their league game.

END_OF_DOCUMENT_TOKEN_TO_BE_REPLACED

It was his performance his family were surely proud of and of course, the inevitable texts of congratulations started to come in.

But the one he received from his nan was a rather mixed bag.

See, one small bit of information we left out at the beginning, is that Brian went to the Galway Races last week and took part in a rather ill-advised drinking game called odds.

Unfortunately for Brian, he was on the losing side of the game and ended up getting his ear pierced, much to the dismay of his nan.

She told him in no uncertain terms what she thought of the new piece of bling in his ear... 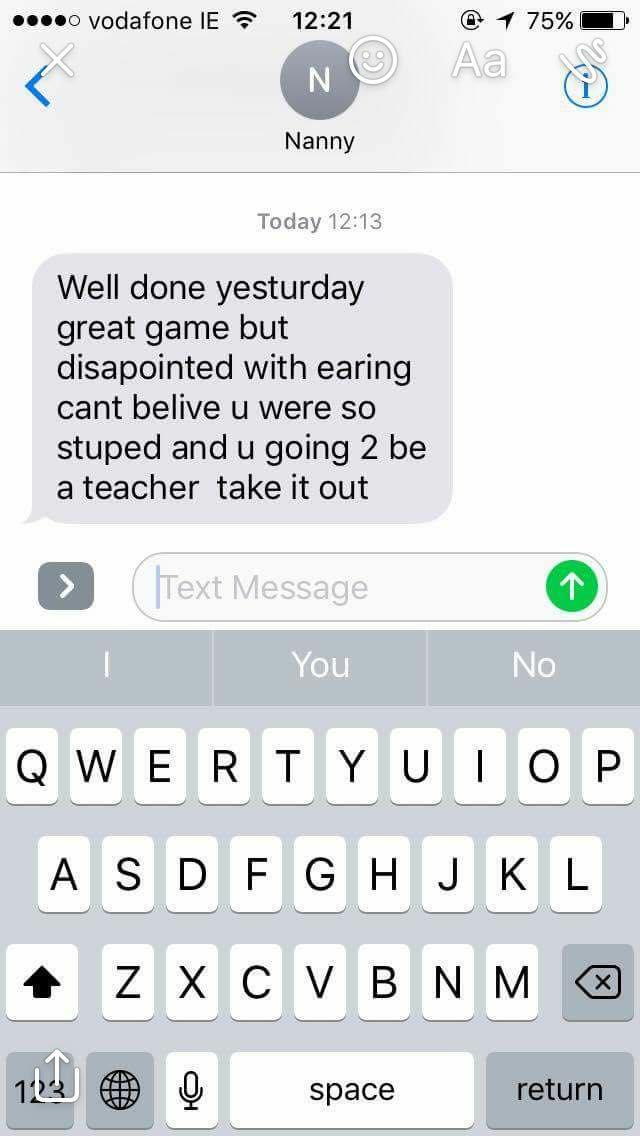 For feck sake Brian, take that yoke out of your ear...

Advertisement
Cheers to Wifey McIntyre for sending this our way.
Got a story for JOE? Hit us up on Facebook or Twitter, send it to our WhatsApp number 087-4001102 or mail editorial@JOE.ie.

popular
Wrestling legend Hulk Hogan 'paralysed from the waist down'
Harvard study reveals how many times men should ejaculate each month to stay healthy
Omniplex Cinemas are hiring for an awesome and very rare job
Prime Video has just added one of the best dramas of the last decade
Richard Madeley apologises after calling Sam Smith 'he' and bungling guest's pronouns
Police special operations unit seize mother's e-scooter after she took child to school on it
Parents left in shock after gorillas start mating in front of kids at zoo
You may also like
3 months ago
Brendan Óg Duffy's father speaks powerfully about his son's death
3 months ago
Gardaí investigating alleged assault on under-9 GAA player at children's sports event
4 months ago
Roscommon GAA confirms investigation into alleged assault on referee during juvenile game
6 months ago
Looking for a hotel room for the All-Ireland Final weekends? It won't come cheap...
7 months ago
Taoiseach condemns "disturbing" fight at Galway v Armagh game
8 months ago
The 2 Johnnies share unbelievable catfish ordeal affecting over 40 people
Next Page