... He's the greatest defender in whole wide world..." We all know how it goes.

Ireland haven't had a centre-half like Paul McGrath since his retirement in 1997 and it's entirely possible we never will again. 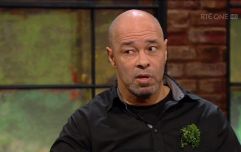 END_OF_DOCUMENT_TOKEN_TO_BE_REPLACED

Sadly for us, the former Manchester United and Aston Villa man is 56 now - but anyone who ever saw him play in green probably clings to the dream that we'll all turn on our telly this evening to see a Paul McGrath in his prime lining out against the Italians in Lille for Ireland's decisive clash.

Not least McGrath himself. The Ireland legend posted a picture to Twitter of himself looking tired in an Ireland jersey, captioned: "Sprinted up and down the back garden, changed jerseys and still no call from Lille. Best of luck Irish lads."

Sprinted up and down the garden, changed jerseys and still no call from Lille 🙄best of Irish luck lads 🇮🇪#believe pic.twitter.com/fo9fwyup31

Ah Paul, if it were up to us you'd be on the next flight out.

popular
Netflix has just added an incredibly tense 97-minute thriller
Irish person dies after drowning in Spanish resort swimming pool
A county-by-county breakdown of the average rent in Ireland as rent inflation reaches record high
Nearly 100 flights delayed at Dublin Airport on Monday
18 counties hit with weather warning as temperatures set to reach 29 degrees
WhatsApp introduces way to choose who can and can't see you're online
QUIZ: Can you get top marks in this short but tricky Irish geography quiz?
You may also like
2 months ago
Late Late Viewers left in awe of Paul McGrath's memories of Jack Charlton
3 years ago
Vegetarian cocktail sausages recalled over presence of metal pieces
3 years ago
Paul McGrath says son found safe and well
3 years ago
Tommy Tiernan's interview with Paul McGrath was absolutely incredible TV
7 years ago
Happy Birthday Paul McGrath: Just some of the reasons why we love the Irish legend
8 years ago
Ireland's greatest ever defender pays tribute to Richard Dunne
Next Page