Don't let anyone tell you that the pre-season games aren't physical affairs.

Considering the weather we have had here of late it is something of a miracle that so many games went ahead all over the country today. The McGrath Cup and the McKenna Cup all began today and there was also action in the O'Byrne Cup and in the FBD League, the pick of which was the meeting of Sligo and Galway in Tuam.

The highlight from those in attendance was the performance as former Kildare man James Kavanagh on his debut for the Tribesmen. Kavanagh can be seen on the left of this picture but it is the unidentifiable Sligo man we are interested in, as he gets planted as he tries to get his hands on the ball. 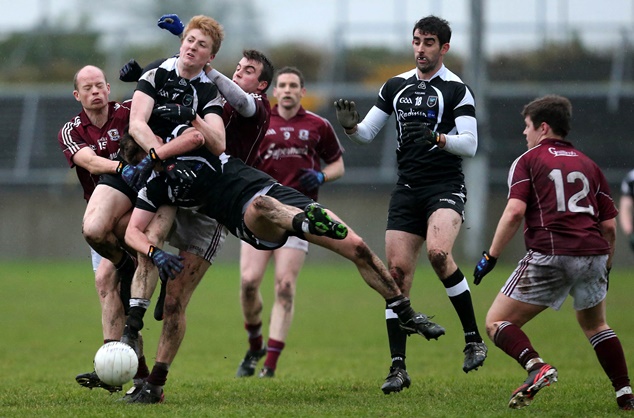 Tough stuff on a miserable January day. However, as the main picture shows, it was a good natured affair with Galway running out 3-10 to 0-8

popular
The six Eurovision countries with "irregular voting patterns" have been revealed
Eurovision producers reveal "irregular voting patterns" during Saturday night's final
Work more hours or get a better job to tackle cost of living, says UK Minister
QUIZ: Try out one of our trickiest General Knowledge Quizzes yet
QUIZ: Can you name all the countries beginning with 'A'?
Where will 2023's Eurovision be held if Ukraine can't host?
REVIEW: Van Gogh Dublin is a truly unique cultural experience
You may also like
5 days ago
Limerick hurler arrested following alleged altercation with Tipperary player in Limerick pub
3 weeks ago
Woman in her 20s dies after accident during Camogie match
7 months ago
Wicklow GAA to investigate fight after Under 15 match on Saturday
1 year ago
Post-match celebrations and a lack of social distancing at certain events put club game on hold
1 year ago
Cork GAA pleads with clubs and supporters “not to engage in celebrations that breach current guidelines”
1 year ago
What's the Bronco test and why it may come up in conversation this week
Next Page