Pic: This brilliant Paul O’Connell flag could well be the ‘Merkel thinks we’re at work’ of the Lions Tour

There will probably be plenty of Irish flags dotted throughout Brisbane, Melbourne and Sydney for the Lions tests later this month, but few of them will rival this brilliant Paul O’Connell banner.

One of the highlights of the Euros last summer was the number of brilliantly witty Irish flags that were seen held aloft by followers of the Boys in Green at the various venues in Poland, none more so than the ‘Merkel Thinks We’re at Work’ flag which achieved huge fame across the continent.

Given the number of ex-pats in Australia, we’re hoping to see something similar at the Lions’ test encounters with the Wallabies later this month and a gang of Irish, or more specifically, Paul O’Connell supporting fans have got the ball rolling with this brilliant effort that will no doubt get plenty of exposure Down Under over the coming weeks. 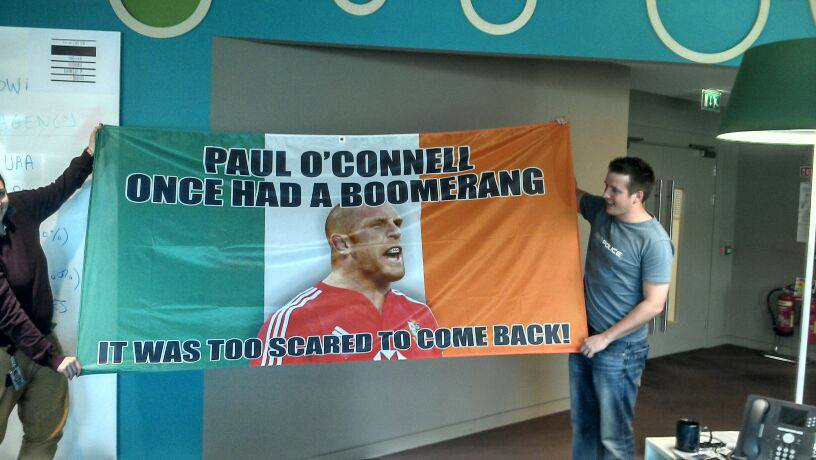 END_OF_DOCUMENT_TOKEN_TO_BE_REPLACED

With a Paul O’Connell/Chuck Norris reference and a little Wallaby-bashing thrown into the mix it really does tick all the boxes and has raised the bar for other Irish flag-bearers heading along to watch the Lions Down Under.

If any of the rest of you have made your own Irish Lions flags or if you come across any that you think might be of interest to us, feel free to send them our way on Facebook, Twitter or to shout@joe.ie.

popular
James May reportedly hospitalised after crashing into wall at 75mph filming new show
Disney+ has just added 10 big movies to its library
An exciting Irish crime thriller is among the movies on TV tonight
Netflix has just added an incredibly tense 97-minute thriller
QUIZ: You'll need to be razor-sharp to get 100% in this General Knowledge Quiz
The JOE Friday Pub Quiz: Week 307
A great underseen action thriller is among the movies on TV tonight
You may also like
4 months ago
Scottish Parliament official dies during rugby game in Dublin
5 months ago
Every Guinness fan needs to try these brand new experimental beers
6 months ago
"Samaritans saved my life" - Brent Pope praised for honest interview on Tommy Tiernan Show
1 year ago
Four Irish players propelled into Lions debate after England hiding
1 year ago
Craig Casey and Johnny Sexton combination backed for Italy clash
1 year ago
Defence grows for Billy Burns after one of the roughest days of his rugby career
Next Page