PIC: This heartwarming story about a young GAA fan and an All-Ireland ticket will make your day

There's some great people in the world...

Tickets for tomorrow's All-Ireland-Final are like gold dust and fans from both counties as well as a host of neutrals are clambering to get their hands on the precious objects.

But unfortunately, some fans will be left disappointed, it's unavoidable when the demand for tickets exceeds the allocation for the stadium.

END_OF_DOCUMENT_TOKEN_TO_BE_REPLACED

For six-year-old super fan David Barrett from Mayo, it looked for all money like he would be one of those left watching from the outside as his beloved Mayo took on Dublin.

David has been at all the Mayo games this year, apart from the drawn final two weeks ago (which he didn't have a ticket for), and was disconsolate about the fact he wouldn't be able to attend the final.

His mother Maria had to remove a poster of Aidan O'Shea from his room because he was so upset.

But while her husband was having a pint at their local watering hole called Mulvihill's, and telling the barman about the disappointing news of not being able to secure a ticket for little David, a man at the other end of the bar overheard their conversation.

END_OF_DOCUMENT_TOKEN_TO_BE_REPLACED

Introducing himself as Conor, he proceeded to join the conversation and they talked about any number of things from football to the price of milk. A short while later as he got up to leave he asked: "Your son's name is David, right?"

Then, two days ago a letter arrived into Mulvihill's addressed to "Master David Barrett, Mayo's biggest fan." Inside was a ticket to tomorrow's match.

Conor's mother Maria got in touch with us here in JOE to show her appreciation to the stranger named Conor who supplied her son with a match ticket.

"I just want to let Conor know, if he ever sees this, that his kindness will never be forgotten," Maria said.

"Little Davey wrote him a letter!"

Below is David's letter of thanks to the mystery man named Conor, who showed that not all heroes wear capes... 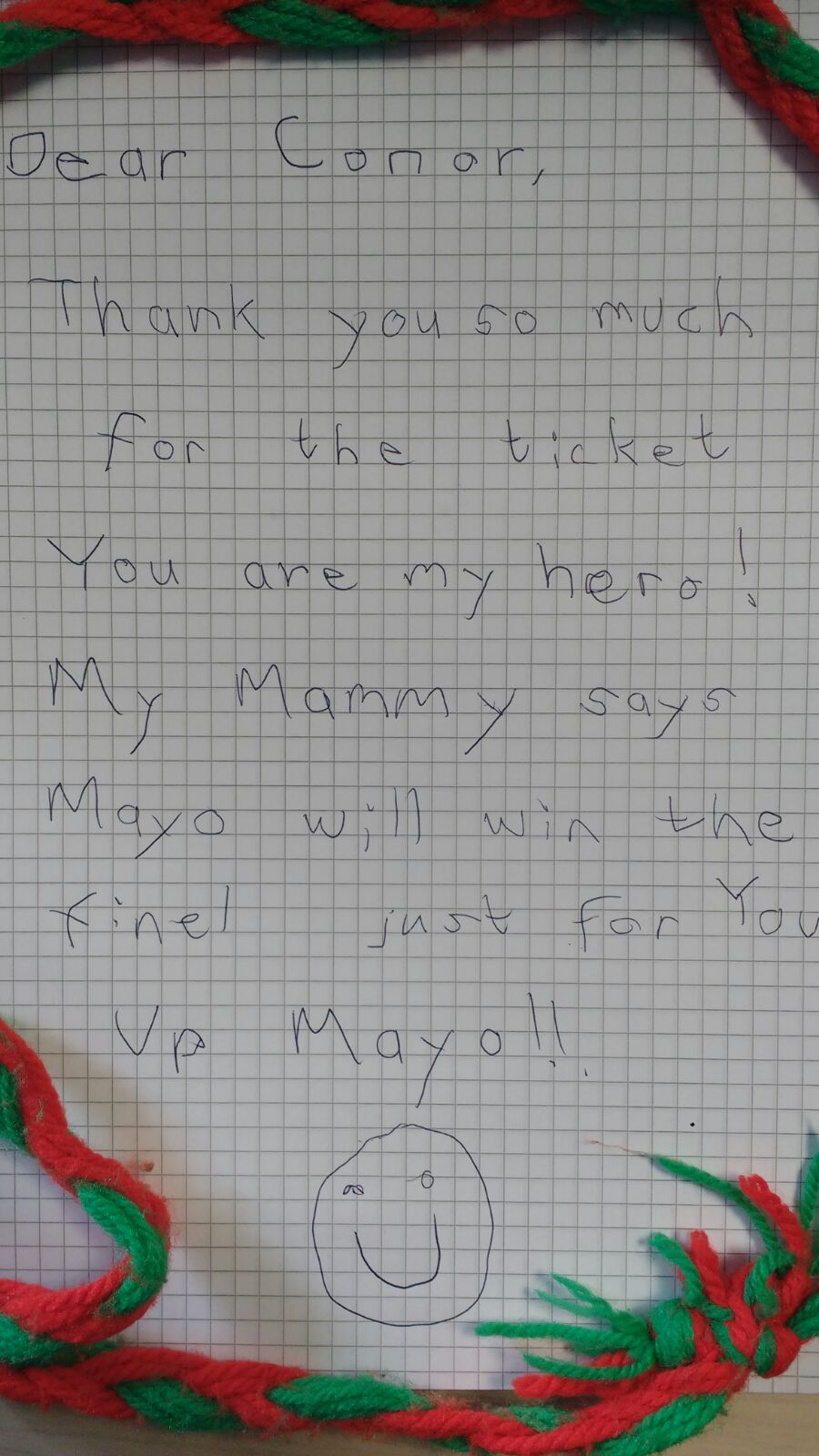 popular
Green Party representative calls for a temporary ban of stag and hen parties in Ireland
Here's how to make €9-11 on Revolut in just a few minutes
Pop Idol star Darius Campbell Danesh has died, aged 41
Off-duty Garda arrested in Tipperary on suspicion of drink driving
Dublin Bus passenger assaulted in suspected homophobic attack
QUIZ: You won't be able to correctly guess the meaning of all these words
Woman dies and four others injured after crash in Mayo
You may also like
4 hours ago
Dublin Bus passenger assaulted in suspected homophobic attack
4 days ago
The 10 must-watch events at the 2022 Dublin Fringe Festival
5 days ago
Don't miss this temporary pop-up night club, coming to Dublin for one night only!
5 days ago
Man charged in connection with death of Sean McCarthy in Dublin
1 week ago
Man in his 20s in critical condition following assault at public transport stop in Dublin
1 week ago
Murder investigation launched after discovery of man's body in Dublin apartment
Next Page