Arsenal and Southampton are facing each other in the Premier League at the Emirates tonight.

During a break in play, the cameraman decided to get a few shots of the crowd and he found this kid and his dad in the stands.

The father flashed the peace sign, the boy did the very opposite. 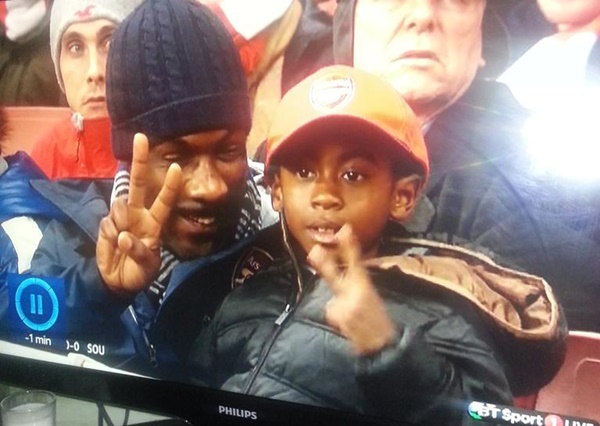 We'd love to be there when he watches it back later on.

Thanks to Daniel Butler who sent this into us.

popular
Peter Kay moved to tears on stage while opening his first stand-up tour in 12 years
Simon Cowell concerns fans with appearance as they 'don't recognise him'
Boy, 1, eaten alive by 11-foot crocodile in front of dad on fishing trip
20 years ago, one of the best sci-fi movies of the 21st century was a box-office bomb
U2 drummer Larry Mullen Jr. says band may perform without him in 2023
Netflix has just added 30 big movies to its library
No, we've never heard of the new "best movie ever made" either
You may also like
1 day ago
The JOE Friday Pub Quiz: Week 323
1 week ago
World Cup 2022 Day Six: All the major action and talking points
1 week ago
Japan fans explain why they clean up after World Cup matches
1 week ago
The JOE Friday Pub Quiz: Week 322
1 week ago
Japan supporters clean up rubbish following famous win over Germany
1 week ago
ITV football pundit Nadia Nadim heartbroken as mother killed by a truck
Next Page