PIC: This Kilkenny fan might be the bravest man in Ireland after this stunt in Waterford

Would you dare try this?

Kilkenny reached their tenth All-Ireland hurling final in 11 years after edging out Waterford by 2-19 to 2-17 in Thurles.

Colin Fennelly's brace of goals proved to be the deciding factor as the Cats reached their third final in a row.

END_OF_DOCUMENT_TOKEN_TO_BE_REPLACED

Tipperary will be looking to take the Liam McCarthy trophy away from Brian Cody's men, but if there's an award for Ireland's bravest man then JOE reader Paddy Lyng would definitely be in contention.

He tells us that he's currently working on the refurbishment of Waterford Court Office and decided to have a little fun on the job after the semi-final win.

In his own words "both crane drivers are Waterford men so I put the Kilkenny flag in plain view of them this morning. I knew that if Kilkenny lost, I would have had had to take today off. Sadly the flag didn't stay up above the Court Office for long but it was all in a bit of banter and my Waterford colleagues took it well". 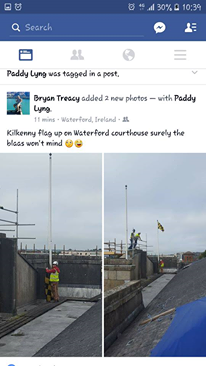 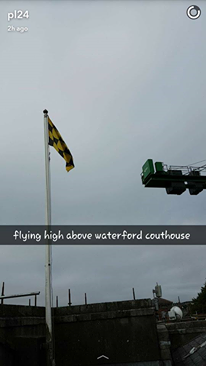 popular
QUIZ: How well do you know Elf?
QUIZ: Can you guess these European countries from their outlines?
The JOE Movie Quiz: Week 80
The 50 most iconic songs of all time* have been revealed
Donald Trump paid $3 million for recount that uncovered more Biden votes
The JOE Movie Quiz: Week 79
The JOE Music Quiz: Week 35
You may also like
1 month ago
Post-match celebrations and a lack of social distancing at certain events put club game on hold
1 month ago
Cork GAA pleads with clubs and supporters “not to engage in celebrations that breach current guidelines”
5 months ago
What's the Bronco test and why it may come up in conversation this week
7 months ago
The Andy Moran GAA Isolation Workout
8 months ago
SuperValu, Centra and the GAA team up on initiative to support elderly people
8 months ago
Meath GAA club confirm adult player has tested positive for coronavirus
Next Page