We like the sound of this Ruby McCoy fella.

The Cheltenham festival starts today and while it feels a bit like Christmas for seasoned punters, it also prompts the sudden emergence of so-called expert gamblers who wouldn’t know a horse if it kicked them in the face 51 weeks of the year.

Well, maybe 50, they’ll be back for the Galway Races again at the end of July.

END_OF_DOCUMENT_TOKEN_TO_BE_REPLACED

You can feed these Johnny-come-latelys any sort of ridiculous information and they’re likely to lap it up, as one would-be punter did when having a wager on who’s going to be the top jockey in Cheltenham this week.

The gullible punter in question is in college in UCD and was fed the information from mates of his before he was about to place the below bet in a bookies in Ferns in Wexford. 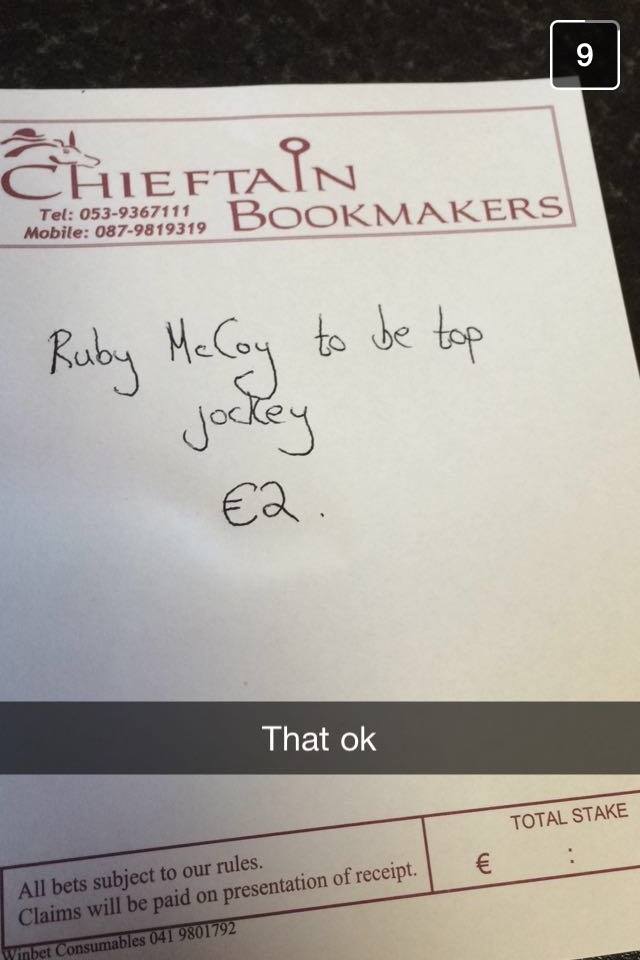 For his own sake, we’ve omitted the name of the punter in question, but we’re also reliably informed that the lads convinced him to talk up a horse called Shergar (seriously) and that he was considering him for a treble alongside Dawn Run and Kauto Star.

To be honest, that treble has as much of a chance of some of the wagers that are likely to be placed in Cheltenham this week.

popular
5 years ago, Hollywood took a massive gamble on a huge sequel... and lost big time
QUIZ: We bet you can't get full marks in this extremely frustrating geography quiz
Nicola Bulley's phone found by the river 'could be a decoy', diving expert suggests
Woman dies from hypothermia after telling doctor she 'couldn't afford heating'
One of the best crime thrillers ever is among the movies on TV tonight
Amazon Prime Video has just added 21 big movies to its library
An incredibly fun action blockbuster is among the movies on TV tonight
You may also like
3 years ago
Who will sit on the Iron Throne? Odds revealed on the big question in the final season of Game of Thrones
5 years ago
Irish punter turns a tenner into €78,000 after 33,000/1 and 1,500/1 bets pay off
5 years ago
Kildare punter nets big from outrageous golf bet
5 years ago
Mystery punter in Cork wins over €82,000 after bet comes in at odds of 33,000/1
5 years ago
A Dublin punter has just won big with this outrageous golf bet
5 years ago
Cork man is waiting on one more bet to win €250,000 in an accumulator
Next Page