Picture: Look at the state of Georges St-Pierre's face after last night's bout

As the old saying goes, we'd hate to see what the other guy looks like, but after a controversial split decision which has Dana White pretty ticked off (totally out of character for Dana, of course), it seems that Georges St-Pierre definitely came off worse after last night's bout at UFC 167.

He was battered and bruised but won controversially, while Johny Hendricks and White are convinced that the decision was wrong. Unsurprisingly, the shouts for a rematch have already started. 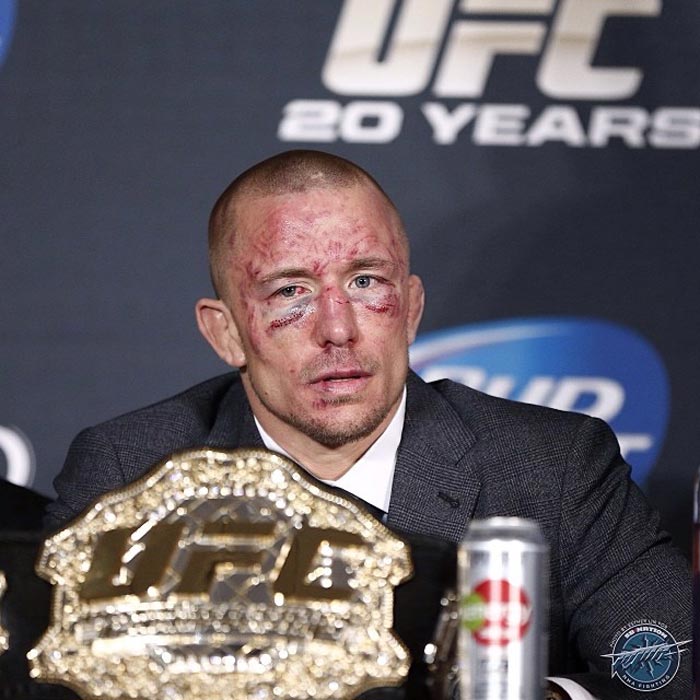 END_OF_DOCUMENT_TOKEN_TO_BE_REPLACED

For his part, GSP has decided to step away from the sport according to what he was saying to the media after the bout. If his face is any indication of how battered and bruised he's feeling today, we hope that he's taking a day off today and has plenty of ice on hand. Ouch.

Hat-tip to ESPN UK on Twitter and MiddleEasy.com for the pictures

popular
Welder awarded €15,000 for unfair dismissal despite admitting to drinking alcohol before work
Netflix has just quietly added 30 big movies to its library
Man in his 40s dies following assault at funeral in Kerry
23-year-old Irishman killed in action in Ukraine, family confirms
Amazon Prime Video has just added 37 big movies to its library
10 years ago today, the scariest movie ever made (according to science) was released
One of the best dramas of the 2010s is among the movies on TV tonight
You may also like
2 years ago
Paddy Holohan has been suspended from Sinn Féin over his claims that "scum" underage girls were having sex with men and blackmailing them
3 years ago
Straight Blast Gym Ireland to open new location in Dublin this month
3 years ago
WATCH: Irish MMA fighter shares lovely video of him and his grandad singing 'Imagine' together
3 years ago
Khabib Nurmagomedov is interested in a fight against Conor McGregor under boxing rules
3 years ago
WATCH: Conor McGregor is beaten by Khabib Nurmagomedov as all hell breaks loose at the end of the fight
3 years ago
WATCH: The Irish have taken over Las Vegas ahead of the McGregor fight
Next Page