45 pints and an unlimited supply of crips and peanuts to the creator of this beauty.

Given how much of a viral phenomenon Paddy ‘Pintman’ Losty has become in Ireland in recent months, it was only a matter of time before his face adorned an Irish flag at an international sporting event.

From this Shane Long/Lionel Richie combo to this immersion-themed number to any amount of Father Ted inspired creations, Irish sports fans have shown a flair for brandishing humorous and topical flags at events and Saturday’s Champions Cup Final carried on a fine tradition.

END_OF_DOCUMENT_TOKEN_TO_BE_REPLACED

JOE reader Alan MacUaidh tells us that he and 13 friends headed over to the clash between Saracens and Clermont having bought tickets before the semi-finals in the hope that it would be Leinster and Munster contesting the match at Murrayfield.

Despite Munster and Leinster failing to reach the decider, they said they’d make a weekend of it anyway and came up with the idea for the flag, which, Alan tells us, he’s still owed €10 for by all the lads on the trip. 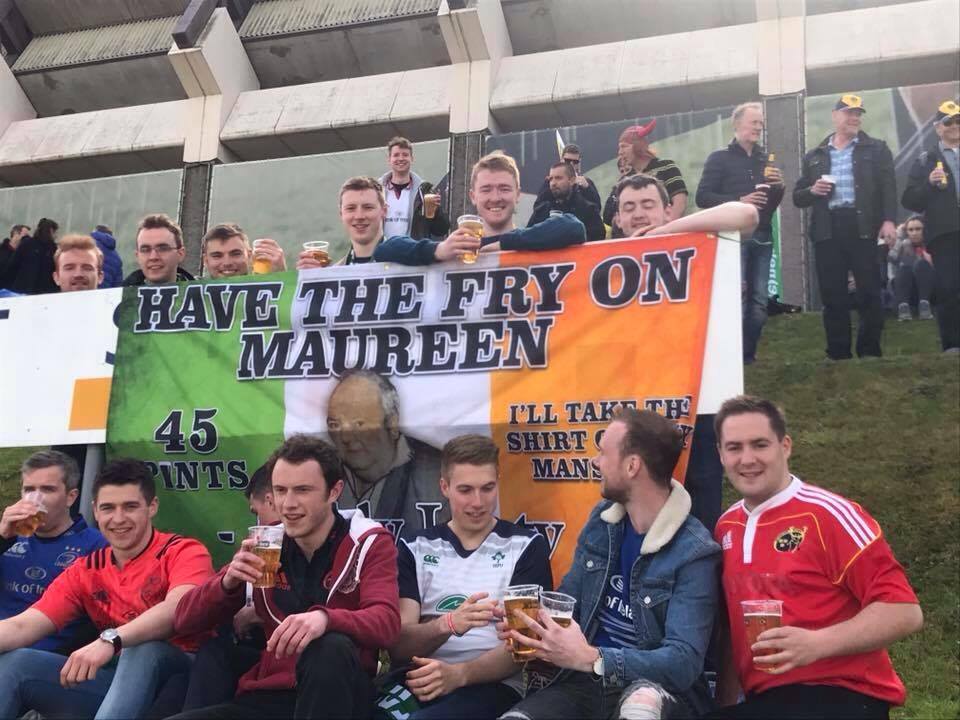 It might not be enough to buy 45 pints for the group whenever they decide to go at it awful very hard agin in the future, but it’ll get plenty of crips and peanuts at the very least.

END_OF_DOCUMENT_TOKEN_TO_BE_REPLACED

No doubt there will be a few more of these on show when the much anticipated Paddy Losty memorial pub crawl comes to Dublin next weekend.

Cheers to Alan MacUaidh for sending this our way. Got a story for JOE? Hit us up on Facebook or Twitter or mail editorial@JOE.ie.

popular
Disney+ has just added 10 big movies to its library
QUIZ: You'll do well to get 100% in this General Knowledge Quiz
25 years ago, Sylvester Stallone delivered his best performance in a hard-hitting crime drama
The 50 most iconic songs of all time* have been revealed
Why Bran Stark is the true villain of Game of Thrones
Netflix has just added an incredibly tense 97-minute thriller
QUIZ: How well do you really know Irish weather?
You may also like
4 months ago
Scottish Parliament official dies during rugby game in Dublin
5 months ago
Every Guinness fan needs to try these brand new experimental beers
6 months ago
"Samaritans saved my life" - Brent Pope praised for honest interview on Tommy Tiernan Show
1 year ago
Craig Casey and Johnny Sexton combination backed for Italy clash
1 year ago
Defence grows for Billy Burns after one of the roughest days of his rugby career
1 year ago
Major upside to Ireland's Six Nations challenge that should make all the difference
Next Page