Dan Roan, BBC News Sports Editor, reported that one fan was injured while Jonathan Northcroft, Sunday Times football correspondent, said that a group of Roma supporters emerged out of Venmore Street before they attacked Liverpool fans with belts. 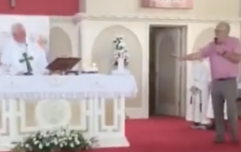 END_OF_DOCUMENT_TOKEN_TO_BE_REPLACED

The Roma group attacked an older Liverpool fan before they were chased down the street.

During the melee, Jeremy Cross, football journalist with The Star, has reported that one person has been stabbed and that paramedics are treating the victim.

Regarding the law enforcement at Anfield, there's an increased police presence at the ground following the attack on Manchester City's bus prior to the first leg of the quarter-final first earlier this month.

The Merseyside Police are investigating.

We are investigating a serious assault of a man outside the Albert pub on Walton Breck Rd at about 7.35pm. Officers are appealing to anyone with information, or mobile phone footage to contact our social media desk via twitter @MerPolCC or Facebook Merseyside Police CC

Paramedics treating the stabbing victim. Incident occurred close to the Albert. Believed to be a Liverpool fan.

Roma fans have just attacked Liverpool supporters with belts, outside the Albert. About 20. One guy down getting treatment

The Roma group came out of Venmore St, and attack was sudden. Picked an older Liverpool fan and atracked him. A lot of police around but they were slow on the scene. Poor guy is still down. Horrible stuff.

Roma group were chased down the street before police arrived.

The Big Reviewski || JOE · The Big Reviewski with Andy Serkis, Squid Game follow-ups & the return of Succession
popular
The JOE Friday Pub Quiz: Week 265
Two prisoners who absconded from Loughan House in Cavan arrested by Gardaí
Emergency services rush to high-rise building on fire in Tallaght
Ryanair is seeking applicants for "the worst job in Ireland"
Hollywood couple Joe Manganiello and Sofia Vergara seen enjoying a Cork chipper
QUIZ: Can you master this General Knowledge Quiz?
A modern classic from Quentin Tarantino is among the movies on TV tonight
You may also like
1 month ago
Gardaí appealing for witnesses following hit and run in Kildare
1 month ago
People warned to avoid Kabul Airport amid "very high threat" of terror attack
1 month ago
An Afghan woman has given birth on a US military flight to Germany
5 months ago
NASA launches first controlled flight on another planet with Mars Helicopter
7 months ago
Three gardaí injured, one hospitalised after anti-lockdown protest in Dublin
1 year ago
The full transcript of Leo Varadkar’s St. Patrick’s Day address to the nation
Next Page