It hasn't been the best of times for Rio Ferdinand these past couple of years.

The former Manchester United defender is never short of something to say on social media, but he may have to watch what he says in future after the FA came down hard on him for comments he made recently on Twitter.

The FA hit Ferdinand with a £25,000 fine and a three match ban and released a statement on the matter this evening, which read: “Queens Park Rangers defender Rio Ferdinand has been suspended for three matches commencing with immediate effect, subject to any appeal, after an FA misconduct charge against him was found proven.

END_OF_DOCUMENT_TOKEN_TO_BE_REPLACED

“It was further alleged that this breach was aggravated pursuant to FA Rule E3(2) as the comment included a reference to gender.

“Following an Independent Regulatory Commission hearing on Wednesday 29 October, Ferdinand was also fined £25,000, severely warned as to his future conduct and ordered to attend an education programme, arranged by The FA within four months.”

The offending tweet, where he responded disparagingly to a tweet from someone questioning his role at QPR, included the slang term ‘sket’, which, according to Collins’ Dictionary, refers to a 'promiscuous woman or girl'. 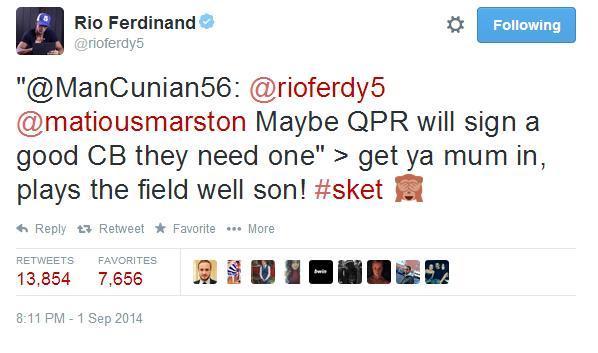 Left out of the team by Harry Redknapp recently and hoping for a recall soon, this ban hasn't come at a particularly opportune time for Ferdinand, who'll have even more time on his hands than he would wish in the coming weeks.

popular
Met Éireann updates weather warning for entire country as temperatures set to fall to -6
Céline Dion diagnosed with incurable neurological disease
The "eighth best movie ever made" is among the movies on TV tonight
Jennifer Lawrence sparks controversy by saying she was the first woman to lead an action movie
5 deadly destinations for a last-minute city break this winter
Shane MacGowan's wife shares update after singer is hospitalised
The start of the superhero takeover of Hollywood is among the movies on TV tonight
You may also like
6 days ago
The JOE Friday Pub Quiz: Week 323
1 week ago
World Cup 2022 Day Six: All the major action and talking points
1 week ago
Japan fans explain why they clean up after World Cup matches
1 week ago
The JOE Friday Pub Quiz: Week 322
2 weeks ago
Japan supporters clean up rubbish following famous win over Germany
2 weeks ago
ITV football pundit Nadia Nadim heartbroken as mother killed by a truck
Next Page