The Armagh-native has put pen to paper on a new IRFU contract extension.

Rory Best has signed a new IRFU contract, confirming that the Irish captain will continue to play for club and country until the end of the Rugby World Cup 2019 in Japan.

Best, in his time as captain, has championed Ireland to a first win over the Springboks in South Africa, a first win against New Zealand and to the Grand Slam on Saturday.

END_OF_DOCUMENT_TOKEN_TO_BE_REPLACED

Best mentioned his delight at extending his current contract, stating support from those closest to him as the thing that keeps him going.

“I am in a very privileged position as captain of Ireland and Ulster to be involved with two groups of incredibly talented players," Best said. 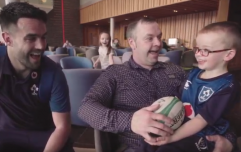 END_OF_DOCUMENT_TOKEN_TO_BE_REPLACED

"I feel I can continue to make a contribution to both Ireland and Ulster Rugby and am delighted to have extended my IRFU contract to the next World Cup.

"Support of family, friends and supporters is a hugely important element for any professional sportsperson and I would like to thank everyone for their support but specifically my wife Jodie who has been incredible and has ensured that as a family we have been able to share in all the great memories of the last few years.”

He made his international debut against New Zealand back in 2005 and has since scored nine international tries, as well as touring with the British & Irish Lions in 2013 and 2017. 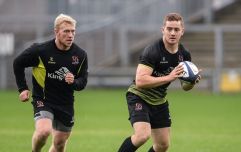 END_OF_DOCUMENT_TOKEN_TO_BE_REPLACED

It was just himself and Rob Kearney from the current team who partook in taking home the Grand Slams in 2009 and 2018. However, he did mention on Saturday, while surrounded by his children, that this year's win brought him a bit more joy than the last.

popular
Amazon Prime Video has just added 21 big movies to its library
Emirates is looking to hire cabin crew members in Ireland for tax-free jobs
Shock as dead dolphin vandalised with graffiti on Dublin beach
The six Eurovision countries with "irregular voting patterns" have been revealed
Fianna Fáil denies paying for bots to boost Stephen Donnelly tweet
One of Liam Neeson's best ever performances is among the movies on TV tonight
One of the best comedies of the 2000s is among the movies on TV tonight
You may also like
3 years ago
COMPETITION: Win a sports GPS tracking device worth €279
3 years ago
Conor Murray on how Ireland's mindset has changed
4 years ago
"Money did not drive the decision" - Head of Ulster Rugby on revoking Jackon and Olding's contracts
4 years ago
Michael D. Higgins has chimed in on the Irish Rugby team's Grand Slam win
4 years ago
Looks like James Ryan was the one who kept his teammates calm as they awaited England's score against France
4 years ago
Get your hands on some Irish Rugby gear and a €250 gift card for JD Sports ahead of Ireland’s clash with Scotland [CLOSED]
Next Page