Everyone has lots of sympathy for London but there are two other teams very put out by the GAA replay scheduling.

The decision by the GAA to put the London/Leitrim replay in at Dr Hyde Park has caused a fair bit of debate. Normally the return game would be played at the other team’s venue but as a deal is in place to keep London’s later stage Connnacht games geographically in Connacht, the neutral venue in Roscommon gets the gig.

END_OF_DOCUMENT_TOKEN_TO_BE_REPLACED

So while most of us moan about unfairness, and the London lads rack up the frequent flyer miles, there are two other teams with legitimate gripes too.

Meet Roscommon clubs St Josephs GAA Kilteevan and Creggs GAA. They were scheduled to play a Junior Championship at the ground next Saturday but now it seems they have been bumped. In fairness to the two teams, they were prepared to make some compromises. 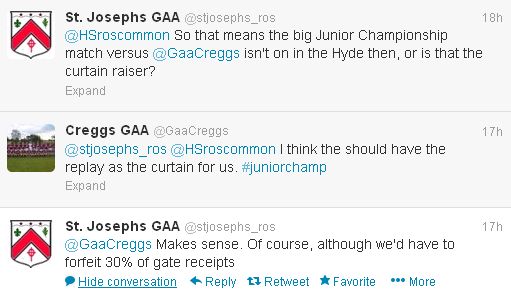 END_OF_DOCUMENT_TOKEN_TO_BE_REPLACED

He did score an early point but it was pretty clear that Paddy McBrearty was not himself yesterday. The young Donegal star was taken off near the end and in today’s Irish News Jim McGuinness revealed the reason.

"Patrick had a problem with his tooth," he told the paper.

"We had to get him to a dentist in Cootehill on Saturday night, at 10 o'clock, and get work done on it.

"He was in a lot of pain for two days and was on pain killers and he was not his normal self. He had been at the dentist during the week. That didn't work out. It was a tough couple of days for him.”

Finally, the classic 'shaggy dog' story. Last night the nation was transfixed as a dog was held aloft by its owner for almost 30 minutes so he could get the mutt's face onto the TV3 post-match coverage of Clare and Cork. Bizarre and endearing all the same. Now the dog, or, more likely, someone pretending to be the dog, has a Twitter account. 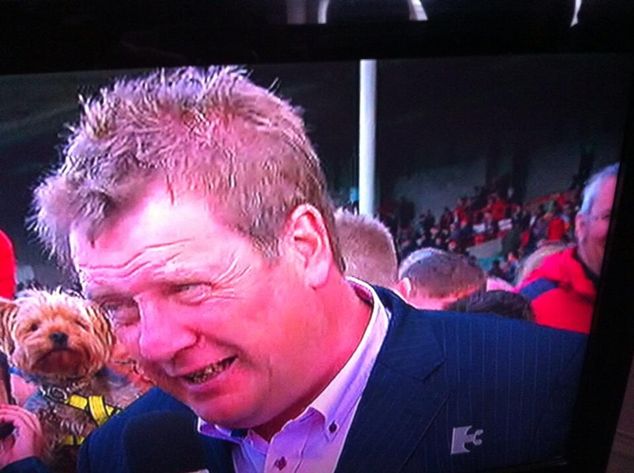 @FitzerTheDog hasn't tweeted much yet, but we remain hopeful he will come good as the summer wears on... good boy...

popular
James May reportedly hospitalised after crashing into wall at 75mph filming new show
Disney+ has just added 10 big movies to its library
QUIZ: You'll need to be razor-sharp to get 100% in this General Knowledge Quiz
The JOE Friday Pub Quiz: Week 307
An exciting Irish crime thriller is among the movies on TV tonight
Netflix has just added an incredibly tense 97-minute thriller
A great underseen action thriller is among the movies on TV tonight
You may also like
1 month ago
Looking for a hotel room for the All-Ireland Final weekends? It won't come cheap...
1 month ago
Taoiseach condemns "disturbing" fight at Galway v Armagh game
2 months ago
The 2 Johnnies share unbelievable catfish ordeal affecting over 40 people
3 months ago
Limerick hurler arrested following alleged altercation with Tipperary player in Limerick pub
3 months ago
Woman in her 20s dies after accident during Camogie match
10 months ago
Wicklow GAA to investigate fight after Under 15 match on Saturday
Next Page