PIC: Sligo Rovers have their say on the giant Ben Bulben "No" sign

They're not the only ones with an opinion on it.

A giant "No" sign, erected by Sligo for Life on the side of Ben Bulben this morning, has caused controversy in Ireland. The sign is part of the No side's campaign ahead of next Friday's referendum on the Eighth Amendment.

Ben Bulben is regarded as an Irish landmark and a major tourist attraction by many, as well as an area of great natural beauty, and Ocean FM host Niall Delaney has accused Sligo for Life of "defacing" the mountain. 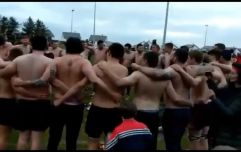 END_OF_DOCUMENT_TOKEN_TO_BE_REPLACED

Football club Sligo Rovers have responded to the sign in a very different way, writing on Twitter: "We at The Showgrounds do not agree with the use of Sligo scenery as a billboard as we saw this morning on Ben Bulben."

Though the accompanying photo would suggest that there's one message their happy to see emblazoned on the iconic mountain (as long as its done in Photoshop).

We at The Showgrounds do not agree with the use of Sligo scenery as a billboard as we saw this morning on Ben Bulben.

The #bitored need you this Saturday night vs Shams. In tough times we rally together. Kick-off 7:45pm tickets at turnstiles 🔴⚪️ pic.twitter.com/LcBO9ptF9I

popular
Amazon Prime Video has quietly added 18 big releases to its library
Confirmation on lifting of restrictions for pubs and events expected this week
Here's where all the 149 tickets that won €36,687 in Saturday's Lotto were sold
David Jason says he wants to play Del Boy in Only Fools And Horses again
That Nic Cage film everyone is talking about is finally available to watch at home
Put the pedal to the metal with this General Knowledge Quiz
QUIZ: Can you name all the US states with a smaller population than Ireland?
You may also like
1 month ago
Gardaí seek three masked men following aggravated burglary in Sligo
2 months ago
Lotto player in Sligo wins €1 million while jackpot grows to highest number in Irish history
2 months ago
Gardaí seek public's help in identifying four bodies found in Clare and Sligo
3 months ago
New €140 million road officially opens today, replacing one of Ireland's most dangerous roads
3 months ago
WATCH: Irish surfer nominated for 'Ride of the Year' after surfing this 60-foot monster in Sligo
4 months ago
New dual carriageway opens in Sligo, replacing well-known accident blackspot
Next Page