So the New York Times thought Andy Murray was English

The joke about the Wimbledon champ being Scottish or British is well worn out, but the New York Times took a new angle yesterday.

Yesterday was a pretty great day for Andy Murray. The first British male to win Wimbledon in 77 years, the first British singles winner since Virginia Wade in 1977, he should no longer have to hear any questions about if and when he would win the biggest prize in his sport.

All day yesterday the jokes about his nationality had been flying, with the classic ‘Scottish if he loses, British if he wins’ line being trotted out about a million times on Twitter. We’re all bored of it so you can imagine how Murray feels.

END_OF_DOCUMENT_TOKEN_TO_BE_REPLACED

Anyway, as most of the UK celebrated his win last night, one of the biggest names in journalism offered a new slant on the Murray nationality story.

Just minutes after Murray had beaten Novak Djokovic the New York Times had their match report ready and tweeted out the following story. 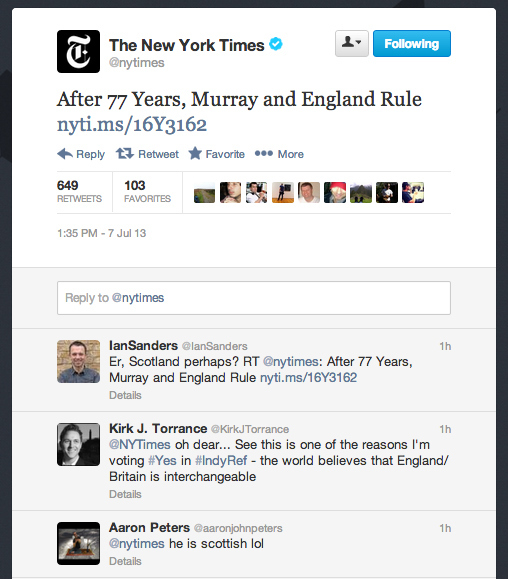 The accompanying story had the same headline and as you might imagine, a lot of people, especially Scots, didn’t take the news too kindly. 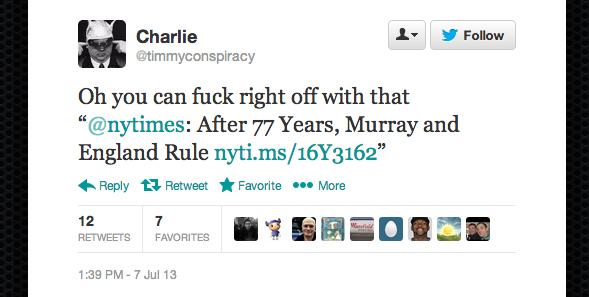 Within minutes the story was changed to ‘After 77 Years, Murray and Britain Rule’. We suspect someone in the New York Times received a right bollocking though...

Hat-tip to Buzzfeed for the screen caps

popular
A classic Western is among the movies on TV tonight
One of the most underrated sequels of all time is among the movies on TV tonight
An underrated Jason Statham thriller is among the movies on TV tonight
The JOE Friday Pub Quiz: Week 300 - the Triple Century
Met Éireann gives update on weather warnings for this weekend
The 50 most iconic songs of all time* have been revealed
New horror movie trailer has one of the best jump scares in years
You may also like
16 hours ago
The Chase star Bradley Walsh can't control his laughter after the most NSFW answer ever
1 week ago
WATCH: Lightyear star reveals who'd win in a fight between him and Thanos
1 week ago
30 years on, The Simpsons writer confesses he misunderstood iconic joke
4 months ago
30 years ago, Arnie's biggest prank ended with Stallone's biggest flop
4 months ago
China gives Fight Club a new ending, manages to completely change the plot of the movie
6 months ago
Who tweeted it: Simu Liu or Rahul Kohli?
Next Page