It's going to be cold in New Jersey this Sunday, but what other games in the history of the NFL have seen freezing football in frigid conditions?

The weather outside looks like it is most certainly going to be frightful for the folks who plan to attend this year's Super Bowl in the Met Life Stadium in New Jersey. Over the past few days, workers have been doing their best to rid the stadium of snow, and with more cold weather on the way, they might have to work over time to get the venue ready for the big game on Sunday. 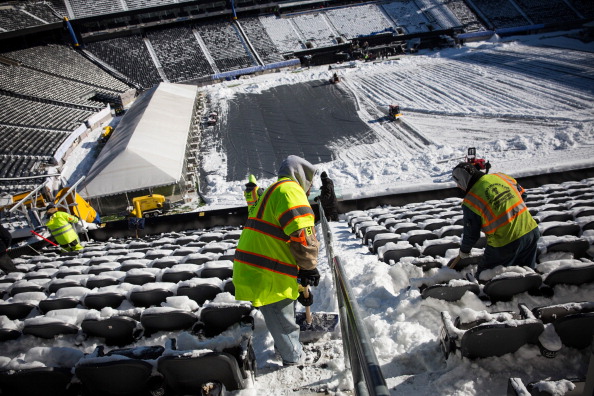 END_OF_DOCUMENT_TOKEN_TO_BE_REPLACED

With that in mind, and given that they're currently expecting temperatures in the teens (which convert to around -8C), JOE decided to look back at a few of the coldest games in the history of the NFL. If you want to catch this weekend's big game but stay warm and get free pizza thanks to our mates at Papa John's, then head over here and check out all the details about JOE's Super Bowl party in The Mercantile.

The Ice Bowl
Sunday is looking like it might be cold, but it doesn't sound like it's going to be a patch on The Ice Bowl, widely recognised as one of the coldest games of football ever played. The game for the NFL championship in 1967 pitted the Dallas Cowboys against the Green Bay Packers, and temperatures dropped as low as -57°F when you take into account the wind chill, which is about -46°C. We can't imagine that type of cold, nor do we want to, frankly. 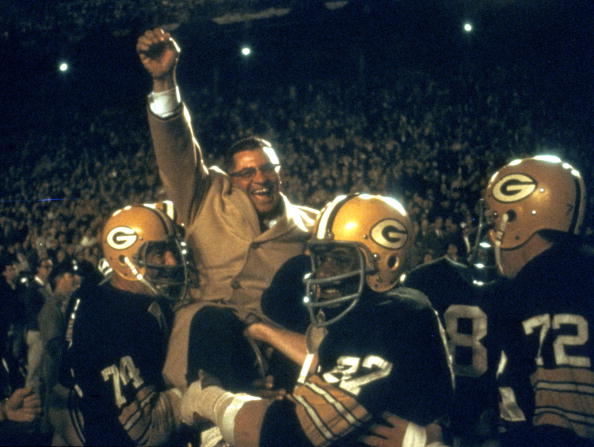 END_OF_DOCUMENT_TOKEN_TO_BE_REPLACED

It was so cold, that apparently referee Norm Schachter's lips froze to his whistle when he tried to signal the start of the game. The fans were quite clearly freezing, but they were treated to a pretty dramatic game where Green Bay raced out to an early 14-0 lead, with legendary quarterback Bart Starr calling the shots. 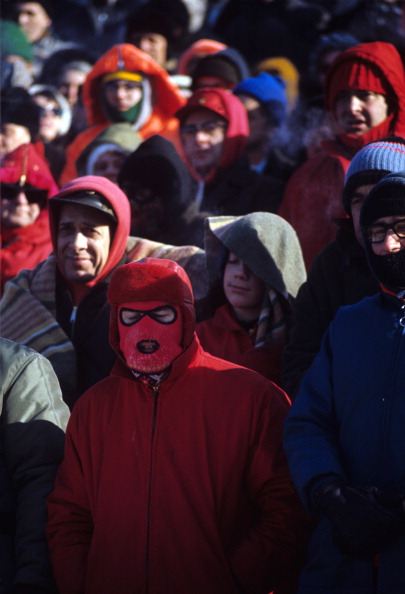 Dallas clawed their way back in to it, forcing two errors and making it just 14-10 at half time. Dallas added to their points haul in the third quarter and took the lead, with the icy field and poor conditions beginning to tell. On the last offesnive drive of the game for Green Bay on third and goal, Starr was able to get over the line and give his team the lead in the dying moments, and after they added the extra point, two incomplete passes from Dallas ended the game.

Several players suffered badly from frostbite, and Packers lineman Ray Nitschke lost a few toenails and his toes went purple, while Bart Starr's fingers suffered from frostbite and plenty of players from both sides finished up the game suffering from the flu or flu-like symptoms. We don't like the sound of any of that.

The Freezer Bowl
With the name Ice Bowl already taken, the equally cold AFC Championship game in 1982 between the Cincinnati Bengals and the San Diego Chargers became known as the Freezer Bowl. 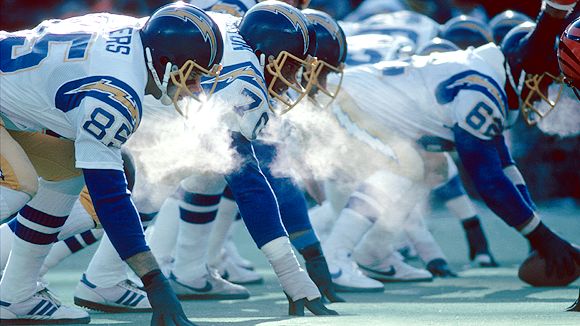 END_OF_DOCUMENT_TOKEN_TO_BE_REPLACED

While the air temperature was a lovely -22°C, almost tropical compared to the Ice Bowl, the wind chill was what made this game famous, as it forced the temperatures as low as -51°C. Again, so very, very cold that we can't even understand it.

The game itself wasn't as much of a spectacle as the Ice Bowl however, as the Chargers ended up on the wrong end of a 27-7 loss, and perhaps it was the experience of Cincinnati head coach Forrest Gregg that helped them to succeed, seeing as he had played in the Ice Bowl during his career with the Green Bay Packers.

With a wind chill of a very tasty -32°F (which works out at a balmy -35°C), this game in the AFC between the Buffalo Bills and the Los Angeles Raiders was one for the ages, in terms of sheer coldness anyway.

According to Buffalo News.com, the Bills training staff couldn’t fill cups with water or Gatorade to keep the players hydrated because it simply froze too quickly to get it to them, which is pretty decent proof that it was in fact bloody freezing. 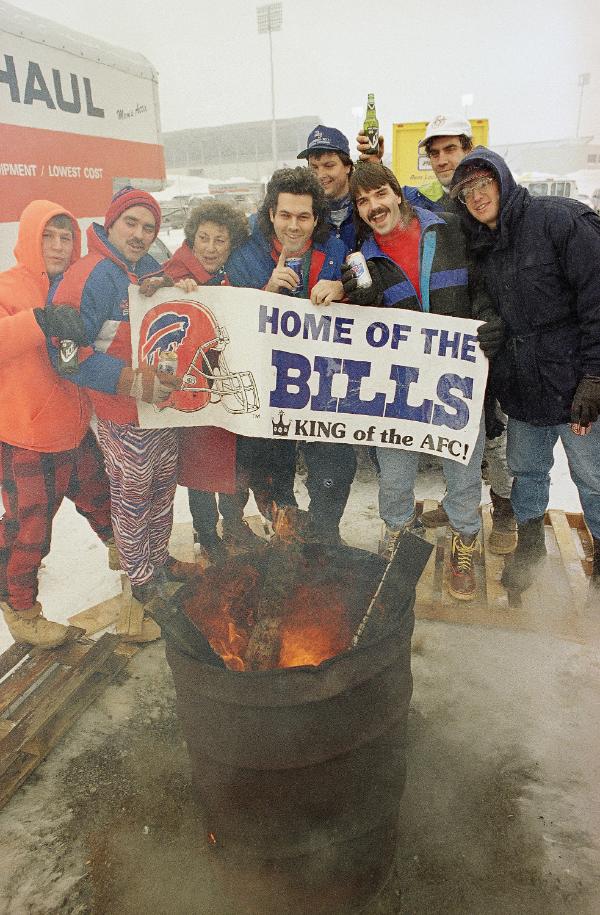 This game was also a bit more of a contest and it was a particularly important one for the Bills, who eventually emerged as the winners and headed to their fourth consecutive Super Bowl (after winning the AFC Championship), which they were ultimately to lose, and remain the only team in NFL history to make it to the Super Bowl four times and not win a single one.

That year, they had the legendary Bruce Smith at defensive end, who specialised in sacking quarterbacks and was a fan favourite. With the Polar conditions setting in, they had a pretty clever sign that honoured both him, and the freezing conditions too. 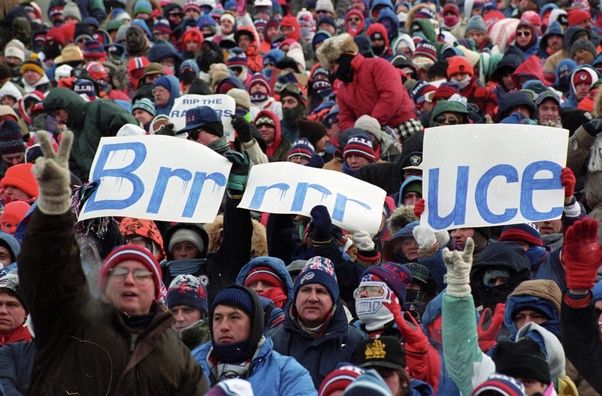 It was a game that saw its fair share of errors thanks to the cold weather, with the kicking in particular suffering, but the Bills eventually came out on top 29-23 in a game which saw Steve Tasker almost returned a punt 67 yards to the endzone, before being stopped at the one-yard-line. While he didn't score, it was a turning point, and most fans thought that as the Bills went marching on towards their fourth Super Bowl in a row, they couldn't possibly lose another, could they?

popular
5 years ago, Hollywood took a massive gamble on a huge sequel... and lost big time
Netflix has just added 12 very big movies to their library
One of the most underrated crime thrillers of recent years is among the movies on TV tonight
Netflix backtracks on anti-password sharing measures following user outcry
Tom Hardy set to play Hannibal Lecter-type serial killer in new series
Guy Ritchie's new war movie looks like it'll be a very emotional watch
The 50 most iconic songs of all time* have been revealed
You may also like
7 years ago
Video: Galway lad lands slick trampoline trick shot using an American football
7 years ago
Video: Irish people watch lacrosse for the first time and explain why it’s nothing like hurling
7 years ago
Pic: WWE’s Triple H plans to eat this mountain of food over 3 days
7 years ago
Video: College footballer performs 40-inch box jump while holding two 32kg dumbbells
7 years ago
Video: The latest People Are Awesome compilation features some unbelievably talented kids
7 years ago
Deceased coach wills $200 to all of his former players to enjoy a night out
Next Page