The best and worst celebrity appearances at WrestleMania

The WWE has seen some of the biggest celebrities on the planet step into the squared circle at its flagship event, so here are some of the most memorable

With that in mind, JOE decided to cast our eyes back over some of the best (and worst) celebrity appearances through the ages of WrestleMania.

END_OF_DOCUMENT_TOKEN_TO_BE_REPLACED

Where else could we start? To kick off the first ever WrestleMania, Vince McMahon went looking for the big time celebs of the day, bringing in Mr. T, who competed in a tag team match with Hulk Hogan, Muhammed Ali as a guest referee, Cyndi Lauper to blast out 'America The Beautiful' and the one and only Liberace as a guest timekeeper, presumably because he had a collection of really nice watches. 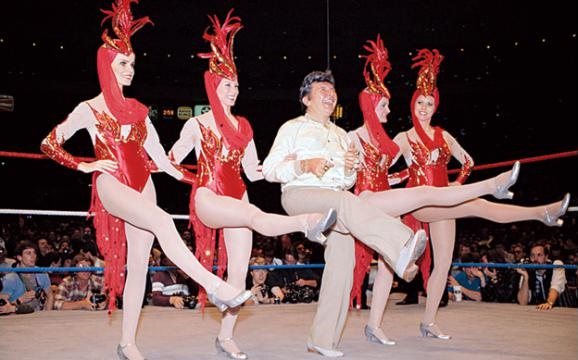 This perhaps started the association of celebrities with the brand in a really big way, and looking back now, it seems incredibly difficult to top that with whatever line up they manage to pull together for this year's anniversary event.

END_OF_DOCUMENT_TOKEN_TO_BE_REPLACED

The one time heavyweight champion of the world has been somewhat of a frequent visitor to the squared circle of Vince McMahon's wrestling company, but his appearances in the run up to WrestleMania gave some great publicity to the whole event. He started out on Vince McMahon's side, was somehow involved with DX, and then eventually switched allegiances to Stone Cold; he just couldn't make up his mind.

Things were a little lower budget back then, there were fewer fancy screens and fireworks, and more cloth banners hanging from a ladder that just said Raw. We'd also forgotten just how tight Stone Cold's jeans were, but we'll never forget JR's “Tyson! Austin! Tyson! Austin! By gawd almighty!”

END_OF_DOCUMENT_TOKEN_TO_BE_REPLACED

Ah lovely Pamela. She appeared alongside Diesel (also known as Kevin Nash to some of you out there) as a ringside escort, which really was a classy name to give her position for the evening. Both her and Jenny McCarthy were in attendance, as the latter accompanied Shawn Micheals to the ring at WrestleMania XI. Being 'Big Daddy Cool' as he was, he left with both ladies afterwards.

Pam wasn't finished with the WWF afterwards though, as she appeared in a skit where wrestlers were leaving her messages on her answering machine, including the incredibly scary Doink the Clown. No one needs that.

Floyd 'Money' Mayweather knows a good publicity opportunity when he sees one, and appearing on the wrestling as it was gaining in popularity was a pretty great one. Being a trained boxer, The Big Show decided to have a few words with him and the two ended up fighting in a No DQ match at WrestleMania XXIV. Floyd accidentally broke the Big Show's nose in one of the all too frequent confrontations that happen in the ring before any actual fighting took place, but we're sure there were a few apologies exchanged afterwards.

Before she was famous for being the star of seven different reality shows all about how she wasn't really famous for anything and is one of the world's dullest people, she too was looking for any sort of publicity that she could possibly get, so she too appeared at WrestleMania.

She operated in an official capacity as a 'hostess', and used words like 'cool' and 'hip' to describe the event. Much like the time The Muppets appeared on Raw, this was a very awkward and pretty cringe-worthy crossover that we can never forget, unfortunately.

We were all scared by The Undertaker as children, but when he came back as some sort of bad ass motorcycle riding guy, it just wasn't the same. Part of that was that he changed his iconic funereal music for a Limp Bizkit song (or possibly Kid Rock...or both?) but either way, he did at some stage enter the ring to the tune of 'Rollin'. As a result, they played it live at WrestleMania XIX, and it looked like this:

The Undertaker with a motorbike with an American flag attached to the back just didn't make any sense for us, but for some reason they thought it worked. Notable mention must go to Kid Rock's shambolic performance that was greeted with mostly silence, and the moment when In Living Color played CM Punk's theme at WrestleMania last year, and you could hear Middle America gasp as they realised for the first time that they weren't white.

popular
Gardaí unveil new Armed Support Unit vehicles to replace older models
Netflix has just added 33 very big movies to its library
The full list of cancelled flights in and out of Dublin Airport on Monday (so far)
One of the greatest crime movies of all time could be getting a sequel
Amazon Prime Video has just added 51 big movies to its library
Increase in passenger charges at Dublin Airport may be on the way
An action-packed thriller is among the movies on TV tonight
You may also like
2 weeks ago
Vince McMahon steps back as WWE CEO amid probe into alleged misconduct
3 months ago
QUIZ: Can you name the wrestler based off their finishing move?
3 months ago
WWE legend Scott Hall has died, aged 63
10 months ago
Dwayne 'The Rock' Johnson says gruesome injury is the reason why he doesn't have six pack abs
1 year ago
WWE superstar explains why he eats breakfast cereal after a workout
1 year ago
Dave Bautista talks about Sheamus' potential future in Hollywood
Next Page