What now for Martin O'Neill?

On Friday, Martin O'Neill was dismissed by Nottingham Forest after five months in the job. Few people in Ireland will have been surprised by this decision but is it possible to feel sorry for O'Neill given the state of Nottingham Forest?

The Football Spin on same old Roy Keane, the Big Sam hole at Everton and justice for JLingz

END_OF_DOCUMENT_TOKEN_TO_BE_REPLACED

What will O'Neill's legacy be now after his failure at a club which should have been open to his ability to mention Brian Clough as often as possible and refer to his European Cup medals?

On The Football Spin, Dion Fanning and Paddy McKenna discuss O'Neill's brief time at Nottingham Forest and ask if it vindicates many of his critics when he was at Ireland? 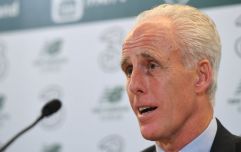 END_OF_DOCUMENT_TOKEN_TO_BE_REPLACED

Does it underline why there is no future for a club in looking to the past which is something every club is prone to, right now especially Manchester United?

They have signed Aaron Wan-Bissaka but is he joining a club which now knows where it's going or are United winging it? Are the Glazers Out protests that have returned significant or should they revolve around something other than the transfer strategy?

popular
Varadkar: "There are two things we have to do... one is to bring wages up"
Galway named one of the top 10 best European cities to raise a family
Bruce Springsteen announces two nights in RDS in 2023
Irish employment law experts warn employers must find ways for staff to take entitled leave
Second doctor accused of sexually assaulting patients at hospital in Kildare
BBC trainee accidentally posts message mocking Man United live on TV
QUIZ: Test your knowledge of Gogglebox
You may also like
3 years ago
Mick McCarthy and Stephen Kenny both set to manage Ireland
3 years ago
Martin O'Neill releases statement following Irish departure
3 years ago
James McClean responds to the departure of Martin O'Neill with a dig at critics
3 years ago
QUIZ: The Martin O'Neill Reign
3 years ago
Jon Walters issues statement on departure of Martin O'Neill
3 years ago
FAI to hold crunch talks with Martin O'Neill, according to reports
Next Page