Hayley O’Connor takes on the might of the JOE sports team each week in a Premier League betting challenge. Hayley's on a roll, while JOE is still stuck in a rut.

Having taken eight weeks to kick the (soon to be updated) win-o-meter into gear, Hayley O'Connor is on something of a roll at the moment as, for the second week in succession, all of her picks came through to further increase the gap between herself and a so far penniless JOE in the Ladbrokes accumulator challenge.

Boring stalemates between Sunderland and Norwich and Arsenal and Chelsea foiled Conor Heneghan's picks on his first weekend of the accumulator challenge seven days ago, but knowing that he can't let Hayley build up too much of a gap ahead of Sean Nolan's imminent return, he's gone for a more conservative approach this time around.

END_OF_DOCUMENT_TOKEN_TO_BE_REPLACED

A character-building win over Hull showed further signs of United's momentum building and they should have too much for the Canaries at Carrow Road.

END_OF_DOCUMENT_TOKEN_TO_BE_REPLACED

Palace have improved immensely under Tony Pulis and aren't conceding many goals, but City are practically unstoppable on home turf.

A 10-man Toffees were nearly good enough to beat Sunderland on Boxing Day and Martinez's men will be keen to right the wrong of that defeat at the earliest opportunity.

All in all, that treble comes in at odds of a little over 3/1 and the way Hayley's going at the moment, you'd be a fool to back against it.

END_OF_DOCUMENT_TOKEN_TO_BE_REPLACED

Palace deserve a lot of credit for their performances of late, but City have yet to drop a point at home all season and this one has banker written all over it.

Defeat to Man United was a blip on what has been an excellent home record for Hull so far and Fulham have lost six of their nine games on the road so far this season.

Spurs really need to be winning their home games if they want to keep in touch with the top four and after a home draw with West Brom, we fancy them to get all three points against the Potters.

That treble comes in at odds of a little over 7/2 and hopefully is enough for JOE to finally make his mark on the win-o-meter.

We'll know for sure next week so check back then for an update, when JOE will hopefully have ensured that Hayley isn't out of sight in the first week of 2014. 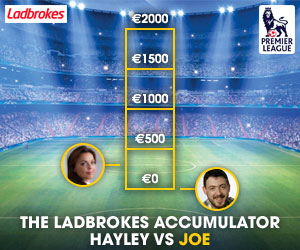 popular
Bus Éireann’s service from Dublin to London will restart this week
Gardaí unveil new Armed Support Unit vehicles to replace older models
One in two young people likely to not own a home by the time they retire
Rockstar Games reportedly shelving remasters of two of the best games ever made
Conservative Party vice chairman resigns live on TV as Johnson administration thrown into turmoil
An action-packed thriller is among the movies on TV tonight
The full list of cancelled flights in and out of Dublin Airport on Monday (so far)
You may also like
11 months ago
Five football documentaries to watch to kill time before the new Premier League season
2 years ago
Arsenal manager Mikel Arteta tests positive for Covid-19
2 years ago
People of Cork, the Premier League roadshow is coming to town
2 years ago
They're making a cartoon show about Manchester City for some reason
2 years ago
The Coca-Cola Premier League roadshow is coming to Galway this weekend
2 years ago
Coca Cola's first Premier League roadshow kicks off in Belfast this Monday
Next Page