After adding a very hefty wedge to her total in midweek, JOE has a lot of work to do to catch up with Ladbrokes' Hayley O'Connor.

An inspired bit of punting on Sunderland to do the business on Stoke, coupled with handy enough wins for the two Manchester clubs added a very tasty €550 to Hayley O'Connor's win-o-meter. The first lady of Ladbrokes now has a commanding lead over the less wise punters at JOE Towers, who fell short thanks to Arsenal and Chelsea only managing draws.

But as our old ranch hand father told us, it is time to get back on that horse. Let's just hope we don't get bucked off again.

END_OF_DOCUMENT_TOKEN_TO_BE_REPLACED

If they can carry even a smidge of that Merseyside derby into this game, Liverpool should run out easy winners.

All in all, that treble comes in at odds of just over 13/2 as I try to really press home my lead.

END_OF_DOCUMENT_TOKEN_TO_BE_REPLACED

Newcastle and Sunderland to draw, 5/2

This one should be tight, tense and probably scoreless

While they are far from perfect, United look like they might be about to hit some form again, and Stoke surely won't be able to stop them.

Tony Pulis had made the Eagles very tough indeed but we still think Arsenal will have too much.

That treble comes in at odds of a just over 13/2 too and should hopefully narrow the gap for us. 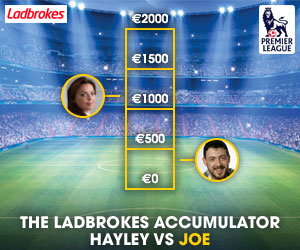 popular
Bus Éireann’s service from Dublin to London will restart this week
A star-studded crime thriller is among the movies on TV tonight
Gardaí unveil new Armed Support Unit vehicles to replace older models
Gardaí are going global with new roles created in UAE and Bangkok
The full list of cancelled flights in and out of Dublin Airport on Monday (so far)
An action-packed thriller is among the movies on TV tonight
Amazon Prime Video has just added 51 big movies to its library
You may also like
11 months ago
Five football documentaries to watch to kill time before the new Premier League season
2 years ago
Arsenal manager Mikel Arteta tests positive for Covid-19
2 years ago
People of Cork, the Premier League roadshow is coming to town
2 years ago
They're making a cartoon show about Manchester City for some reason
2 years ago
The Coca-Cola Premier League roadshow is coming to Galway this weekend
2 years ago
Coca Cola's first Premier League roadshow kicks off in Belfast this Monday
Next Page