You can't make this up.

We wouldn't blame you if you're starting to feel like the Karim Benzema-Mathieu Valbuena sextape scandal is beginning to feel like a strange mix of Dream Team and The Wire. New details have come to light and the Real Madrid striker is facing a nervous future according to AFP.

The Real Madrid striker has been caught with making incriminating comments that have resulted in him being charged with "complicity in attempted blackmail and participation in a criminal association planning an offence punishable by at least five years imprisonment (in this case blackmail).”

Benzema was taken into police custody yesterday and detained over night, but details have emerged of what the French striker is alleged to have said regarding Lyon midfielder Valbuena. 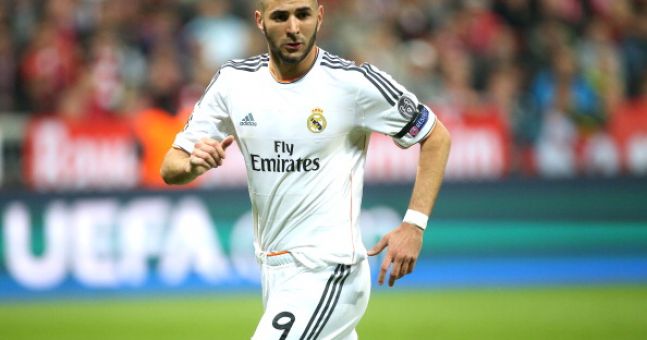 END_OF_DOCUMENT_TOKEN_TO_BE_REPLACED

A source close to the investigation said, "Karim Benzema has admitted speaking to Valbuena at the request of a childhood friend, who was approached by three blackmailers who were in possession of the sex tape,".

"Benzema said he had agreed with his childhood friend on what he should say so that his team-mate (Valbuena) would negotiate exclusively with him."

END_OF_DOCUMENT_TOKEN_TO_BE_REPLACED

French agency M6 have gone one step further though because they're reporting that these are the exact words that have implicated Benzema, "Do not worry. He has no choice. I’ll make him understand. He’ll pay".

M6 also stated that it will now be up to the court to decide whether the France and Real Madrid striker was being serious on the wiretap.

Benzema's lawyers have stated that he "will show his good faith in this matter as soon as possible. He was charged by the judge who notified him that he was a suspect ... It is not a declaration of guilt."

Due to the nature of the charges, France coach Didier Deschamps is unable to select both Benzema and Valbuena in his squad for any upcoming matches.

popular
One of the most ridiculous blockbusters of recent years is among the movies on TV tonight
QUIZ: Only the brightest will conquer this tricky General Knowledge Quiz
The JOE Movie Quiz: Week 173
The JOE Friday Pub Quiz: Week 314
The JOE Music Quiz: Week 123
QUIZ: How well do you know The Mighty Ducks?
QUIZ: Step on up and conquer this tricky General Knowledge Quiz
You may also like
1 month ago
The JOE Friday Pub Quiz: Week 306
2 months ago
Rebekah Vardy breaks down in tears in first TV interview since Wagatha Christie defeat
3 months ago
Gary Lineker says he suffered racist abuse during football days due to "darkish skin"
4 months ago
Merseyside police defend ‘exemplary’ Liverpool fans tear gassed by French police
4 months ago
BBC trainee accidentally posts message mocking Man United live on TV
4 months ago
Kurt Zouma charged with three animal welfare offences
Next Page